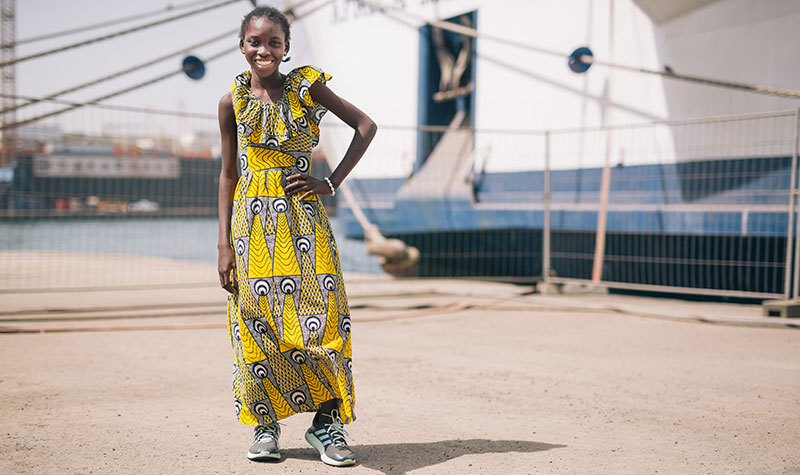 Marie Madeleine loves school. She believes with a good education, she will be able to accomplish her dreams, and she refused to let her condition slow her down.

When she was a child, Marie Madeleine developed an abnormally tight muscle contracture in her leg. As she continued to grow, her knee hyperextended backward, leaving her with a severe limp when she walked. Despite this difficulty, Marie Madeleine continued making the short journey to school, where she was determined to learn.

While the 13-year-old’s condition has caused her to struggle to keep up physically, her family has worked hard to make sure that she has spent her life surrounded by love and acceptance. The young girl does not recall ever being demeaned because of her disability, and this has resulted in a confidence that is clearly seen in the way she interacts with others. Eventually though, Adama believed that her granddaughter’s condition would have held her back from reaching her full potential.

“My hope is for her to be like every other girl with a backpack going to school,” she said. “But we couldn’t afford surgery, so we just waited for a miracle.”

One day, that miracle arrived in the form of news from a neighbour in their village, who told them about the Africa Mercy arriving in the Port of Dakar, about 100 miles from their home. The neighbour gave Adama the information for the patient selection process, and soon Marie Madeleine had a surgery scheduled.

On the eve of her operation, Marie Madeleine talked about her “new life,” envisioning all of the possibilities that lie ahead of her. After a successful surgery onboard the Africa Mercy, Marie Madeleine was ready to begin rehabilitation.

She worked with the rehab team for several hours a week to restore mobility and to improve her leg’s strength. For 12 long years, her knee muscle had not been used properly, and it took time for her to retrain the muscles in her leg to hold her weight. But Marie Madeleine had the end in sight and, eager to get back to school, she persevered.

Several months after her arrival at the Africa Mercy, the bright 13-year-old girl with the triumphant smile and straight legs was ready to go home and back to school!

The day after she arrived in her village, Marie Madeleine was back in the classroom. Her classmates asked her, “How come your leg changed?”

Marie simply replied, “We love God. God has healed me, and His plan for me is to walk like this now.”

After Marie Madeleine’s surgery, her grandmother’s hopes have come true!

“I am so happy to see her going to school with straight legs,” says Adama. “Everything is okay now!”

With her determined spirit, Marie Madeleine has already succeeded. Her Mercy Ships journey may be finished, but she has the rest of her life ahead!

Join other Mercy Ships supporters and help change and save lives.

Give a gift today and help others like Marie