Mariama was born with a severe facial cleft, but Mercy Ships supporters like you healed her. This is her story.

Both Mamadou and Alimatou dreamed of having a family. Several months after they were married, their dream became a reality. Alimatou gave birth to their first child, a little girl who they named Mariama.

Their little girl, who was 7 months old when they brought her to Mercy Ships, was a lively and healthy baby, but a severe facial cleft strained her joyful smile. This facial cleft affected little Mariama’s lip and her nose, making it very difficult for her to eat and caused her parents worry about her future.

Paediatric services capable of treating baby Mariama’s condition are not readily available in their small town. So local doctors directed Mariama’s father to Senegal’s capital city in the hope that he might find help for Mariama there.

Mamadou headed to Dakar and began to search for healing for Mariama. Eventually, he heard about a hospital ship docked in the port of Dakar, which was full of volunteer medical professionals offering life-changing surgeries to those in need.

One week after signing up for the screening with Mercy Ships, Mamadou received a phone call announcing that his daughter had been chosen for surgery.

“I give thanks to God first, and I am very grateful to Mercy Ships,” Mamadou said. “I’m happy. Thank you!”

After her surgery, Mariama and her family stayed at the HOPE (Hospital OutPatient Extension) centre where her parents learned how to make nutritional baby formula and learned about the importance of continued nutrition for their child. Once she had recovered from her surgery, Mariama was finally able to return home with her family, happy and healthy!

Give a gift today to change the life of a patient like Mariama.

Give a gift today and help others like Mariama 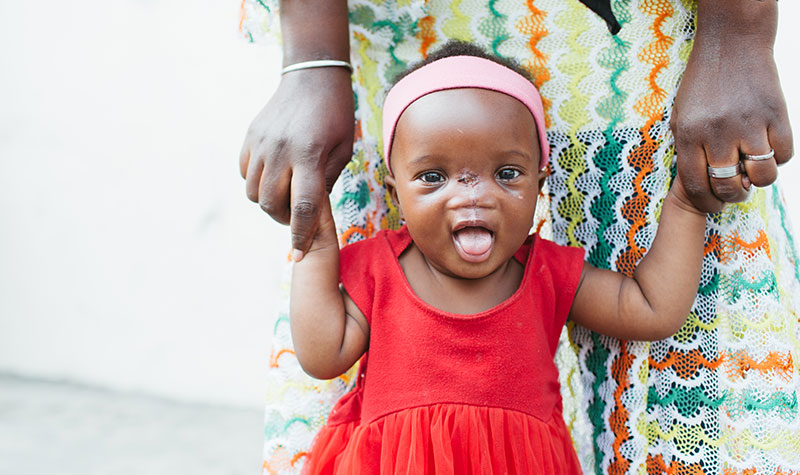