Meet Juste – a character and a half…

Meet Juste –  a character and a half, wrapped up in a four-year-old’s body. He doesn’t seem bothered by the lump on his head and already has a plan for when it’s gone. “After they do the surgery, I will become president, have money and buy a car!” Juste tells his mum, Elisabeth.

Elisabeth isn’t surprised by her little guy’s ambitions. He’s got a way about him – fearless, funny and uninhibited. She marvels at his carefree nature, wishing she could have a dose of it sometimes.

“I was afraid to send him to school for fear of what kids would do. I thought of putting a hat on his head… but could picture them taking it from him and teasing him. You know how cruel some kids can be.” Her thoughts of what could happen got the best of her. She and her husband decided to keep him home from school.

The lump started growing on the top of Juste’s head after he was born. When he was two months old, the doctor who delivered him tried to treat it. Not long after, it returned, so he tried a different technique to remove it. When it continued to grow back, larger each time, he told Elisabeth, “I can no longer help your son – you’ll need to try someone else.”

“After they do the surgery, I will become president, have money and buy a car!” Juste tells his mum, Elisabeth.

Elisabeth found another doctor, but the procedure came with a hefty price tag: 500,000 CFA (almost $900). They had nowhere near that kind of money. She tried another hospital – but, again, the treatment was too costly there. She didn’t give up and found another option, one that was much more affordable through a locally-funded agency. But due to the volume of patients already waiting, Juste would be at the end of a very long waiting list.

By the time he was four years old, Juste’s lump had become larger than a golf ball, and Elisabeth was out of options, except one – prayer. “I prayed… and, soon after, I heard about Mercy Ships!” This brand-new possibility felt promising.

Elisabeth brought Juste to be screened by doctors at Mercy Ships, hoping to finally hear good news. But Juste’s condition required additional testing before a decision on treatment could be made. The wait for an answer seemed to last forever, but it was worth it when Elisabeth received an appointment card for Juste to have surgery!

“Overwhelmed with joy, my husband got down on his knees and said, ‘I’m so happy!’ and thanked God for healing our son through Mercy Ships.”

Then, even better news surfaced. What was originally thought to be a more serious condition was actually going to be simpler to treat. Within just a few days, Juste’s cyst was safely removed for good, and they were given the “okay” by doctors to leave!

Once home, the two were greeted by a very eager family. “Overwhelmed with joy, my husband got down on his knees and said, ‘I’m so happy!’ and thanked God for healing our son through Mercy Ships.”

Will Elisabeth support Juste’s dreams to become president? Maybe. But, for now, she has some ideas on what he should accomplish first… like going back to school.

Will you give a gift today to change more lives, like Juste’s?

Give a gift today and help others like Juste 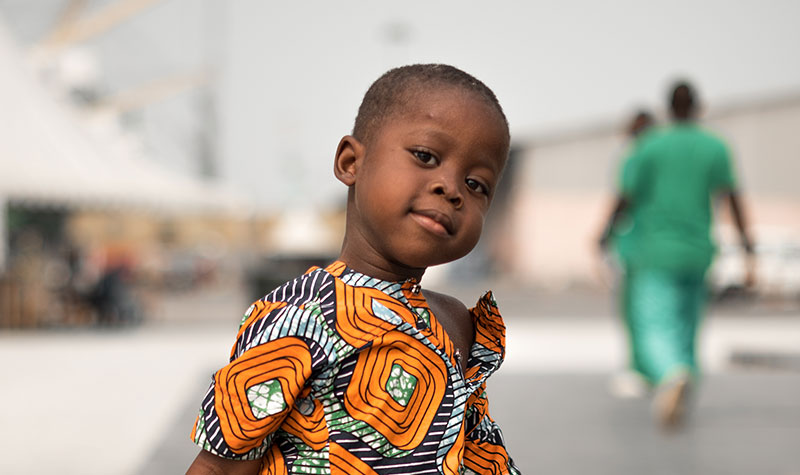