This shouldn't be Gisele's story, but it is...

In 1993 Gisele was 28 years old, married and expecting a baby. Following a miscarriage with her first pregnancy, this baby was perhaps even more precious. She was elated with the anticipation of motherhood and the thought of building a family with her husband. Having children was all Gisele had ever wanted; it was the reason she believed she was here on this earth. Motherhood was within reach.

But 20 years later, Gisele is 48, divorced and childless.

During a prolonged obstructed labour in her Congolese village in 1993, Gisele lost her baby. Owing to the trauma of the delivery, she developed a condition called obstetric fistula, also called vesicovaginal fistula (VVF). VVF is a childbirth injury that creates a hole between the birth canal and urinary tract, leaving the mother incontinent. For 20 years, Gisele has lived with a steady stream of urine trickling down her legs.

Managing her incontinence was difficult because she could not escape the smell. Her damp skirt and wet legs reminded her of the child she lost and of the children she would never have. In the night, she had to wake up hourly to change out of her wet clothes. Gisele’s husband, realising that she would probably never have children, decided to leave. He still wanted a family, he told her, adding bluntly: “And, with you, I am wasting my time.”

While the nature of Gisele’s condition was terrible, her physical pain was now nothing compared to the emotional burden that came with her husband’s public rejection. In her failed attempts at motherhood, she grieved her life’s purpose. In her failed marriage, her fear was confirmed – to be a woman unable to have children was to have no value. Since 1993, Gisele says she has not lived a life – but that she has lived somewhere between life and death, waiting for the day her life would end.

Gisele withdrew into a life of solitude. And she was far from alone. There are more than two million women in sub-Saharan Africa and Asia who live with VVF, according to the World Health Organisation. In much of the developing world, basic obstetric care is inaccessible. Women must live with, or die from, the consequences of unattended childbirth.

Gisele wanted to take her life, and she knew the way she would do it – with poison. What would it be like to drink that last glass of liquid, knowing that she would not live to feel it dampen her skirt? But something kept her going, kept her alive.

With surgery, obstetric fistula is often repairable. As news spread around the Republic of Congo that Mercy Ships was coming, Gisele began to hope. But she tried not to get her hopes up; she had been let down too many times before. It was not until she found herself sitting on a hospital bed in the port of Pointe-Noire waiting for surgery that she allowed herself to believe that she might be healed.

Since her surgery, Gisele is all smiles. Gisele is glowing.

While surgery fixed Gisele physically, it cannot make her a mother. However, she has found something else onboard the Africa Mercy. She has found emotional restoration in the attentive way the doctors and nurses check on her and care for her, and in the relationships she has built with the other patients, most of whom are not mothers either.

When it comes time to discharge fistula patients, the hospital throws a going-away party called a Dress Ceremony. Each patient is presented with a new dress, which she will wear as she goes home. On the morning of Gisele’s celebration, the women gathered in the ward to do their make-up and fasten their head wraps. The room filled with chatter, smiles and an energy like that of a bridal party.

After the celebration was over, Gisele walked out of the hospital, down the dock, and took her first step back into society.

Gisele may always carry with her the grief of the child she lost and the pain of the years of suffering, but she will carry it with her head held high, because she knows the truth. She knows her worth. For too many years she suffered with what should have been, but now it is. Now she can.

Give a gift today to transform more lives like Gisele’s.

Give a gift today and help others like Gisele 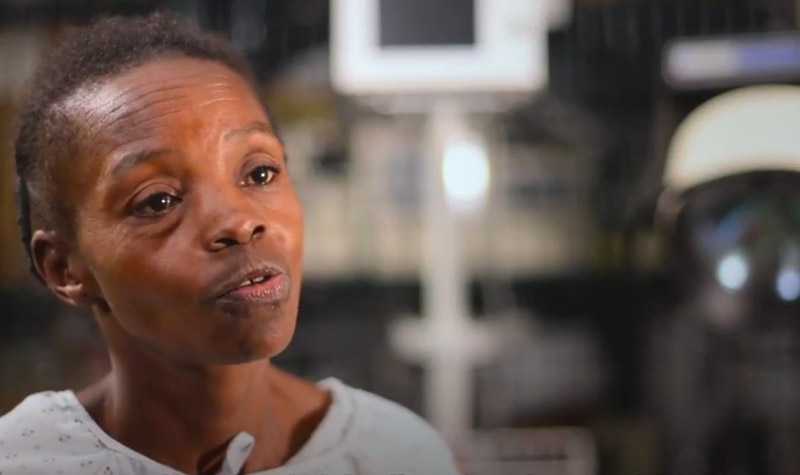