Look at Djimby’s smiling face and her shining eyes. She may be smaller than most other children her age, but she is nothing short of amazing.

This 6-year-old’s strong will and determination come from her grandmother, Ndeye, who has instilled these values into her granddaughter. But Djimby’s smile and beautiful personality can’t hide the painful condition that this little girl has had to endure most of her life.

When Djimby was a toddler, her parents and her grandmother noticed that her legs weren’t straight like those of other children. She had developed a condition called windswept knees, which made standing and walking difficult. 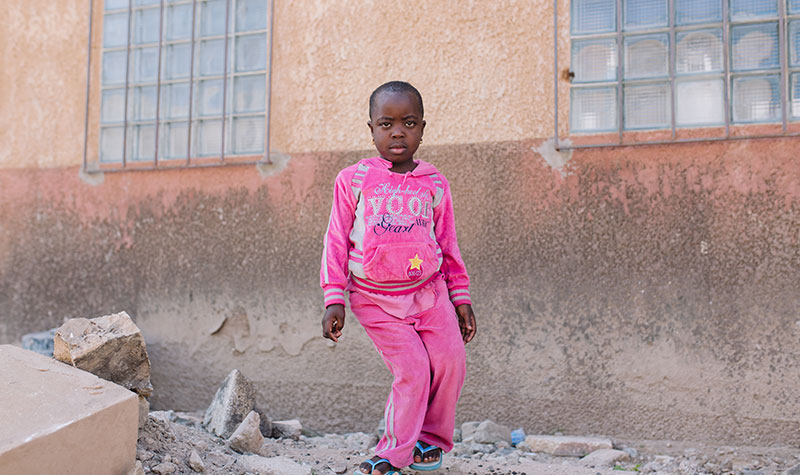 One day, while visiting family, Ndeye noticed a distinct difference between Djimby and her siblings and cousins, not only in physicality but also in ability. This troubled her deeply. “I couldn’t watch one of my grandchildren suffer without doing something,” Ndeye said. So, she took Djimby in and vowed to find a doctor who could heal her granddaughter.

Over the next three years, Ndeye tried to find healing for Djimby but seemed only to reach dead ends. As Djimby got older, Ndeye knew that the time for Djimby to attend school was approaching. She also knew that unless Djimby’s legs were straightened, she wouldn’t be able to go to school or earn money to eat when she grew up. Often Djimby would wake up in a great deal of pain, and since the school was far away from their home, the walk would have been too long and painful.

“I couldn’t watch one of my grandchildren suffering without doing something.”

Despite the setbacks that the two faced, Ndeye vowed to continue her quest saying, “I am healthy, and I can walk. So as long as I am alive, I will keep looking for a solution.”

This perseverance fuelled her, even when all seemed hopeless. Neighbours, friends, and even family members urged her to quit, sincerely doubting that there would ever be a solution.
But Ndeye refused to stop believing that one day little Djimby would be healed.

The breakthrough Ndeye had been looking for came in the most unexpected way at the beginning of last year. One afternoon, a neighbour stopped by Ndeye’s place with some incredible news.

“A hospital ship is coming to Senegal soon,” she said. “Doctors and nurses are coming to operate on people with complicated problems. I heard this on the radio, and you must take Djimby to them.”

A short while later, Djimby and her grandmother began the long journey to Dakar, where the Africa Mercy was docked. The capital sits roughly 135 miles southwest of their home, but the journey was well worth it.

After Djimby was screened for surgery, she was given a date for the operation. With healing finally in sight after so many years of searching, Ndeye felt more hope than ever! 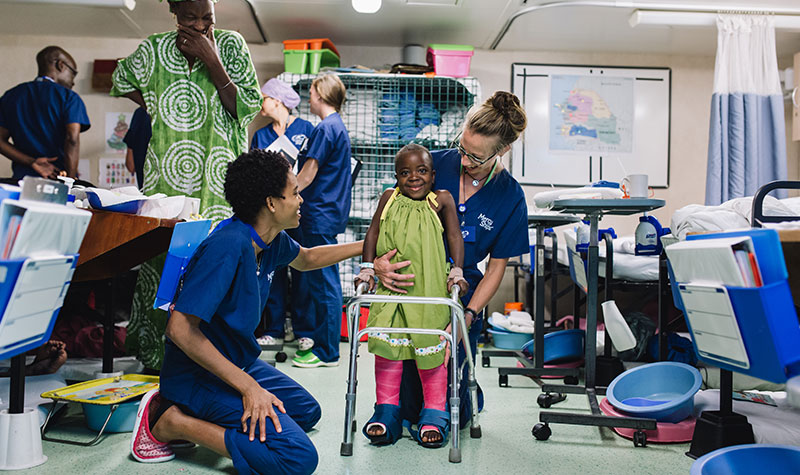 The free surgery onboard the Africa Mercy was just the first step in Djimby’s road to healing and wholeness. The little girl needed months of rehabilitation to ensure the success of her operation. Once again, following the example set by her grandmother, Djimby’s focus and determination were unrelenting. Day by day, this tenacious 6-year-old willed her new legs to move forward, one foot in front of the other, until the day finally arrived for Djimby and her grandmother to return home. Today, following successful surgery and time of rehabilitation, Ndeye now believes that her granddaughter will have a bright future. Soon, Djimby will be able to attend school, fully healed, and standing tall and without pain for the first time in her life!

If you believe that growing up free from crippling deformities, tumours and other treatable conditions should not be just a dream or a hope but a reality for other children like Djimby please give to help more people like Djimby.

You can help to change more lives like Djimby’s by becoming a supporter of Mercy Ships today.