Salamatou and Mariama had never been able to leave their village, until Mercy Ships arrived into Cameroon.

High up Mount Manengouba in Cameroon, through rocky terrain and lush foliage, lies the beautiful village of Bororos. The journey to Bororos is a steep, uphill horse ride surrounded by craggy rocks with only wildlife for company. For two little girls, sisters Salamatou and Mariama, Bororos is the only world they have ever known. Neither of them has been able to leave because of their twisted legs.

The six- and eight-year-old sisters didn’t get the important nutrients they needed during the crucial years of bone development. Without strong bones, the pressure of walking caused their legs to grow incorrectly, resulting in a condition called Valgus. Because of their malformed legs, they both found it difficult to walk to school and only sometimes managed to attend. Their malnutrition, combined with an inability to access surgery, meant Salamatou and Mariama had no option but to learn to cope with their twisted legs.

Their parents felt guilty when they first knew something was not right. “I felt bad that we did not have any money to take them to the hospital,” recalled their mother, Mymoona. “I was worried about them and their future. If I didn’t do anything, I knew they would have a hard time in life.”

'We didn't know the hospital was actually in the ship. We've never been to a ship before,' said Debo.

Mymoona was so worried about her daughters that it began to take a toll on her health. So when her husband, Debo, heard about Mercy Ships, he led all three of his girls down the mountain on horseback, making the brave journey to the coast. They were grateful to have each other as they arrived at a ship they had only heard stories about.

“We didn’t know the hospital was actually in the ship. We’ve never been to a ship before,” said Debo. “When I first came I was afraid for my girls, but then I saw many children like them and the fear went away.”

The sisters’ almost identical conditions enabled the whole family to stay together after they were approved for surgery. With their family by their side, Salamatou and Mariama began to soak in their new surroundings and prepare for the operations that would change the course of their lives.

The first day after their surgeries, Salamatou was up and walking around, challenging her sister, who was convinced the straightened casts didn’t contain her legs. Clutching at the familiarity of her toes, Mariama watched her older sister stand tall. Soon, their strong personalities were evident as they each watched competitively to see what the other was achieving.

Their sibling rivalry throughout recovery encouraged growth as they competed with one another to reach each healing milestone. Who would stand up first? Who could walk the furthest? “They were encouraging each other during their time on the ship,” recalls Debo. “One day, Salamatou said to her younger sister, ‘Because you never smile, I will walk before you…’ And she did! This motivated Mariama in her healing.”

'Now, they will be able to commit to school and use their education. Before, my heart was anxious for my family, but now I am content,' said Debo.

During their rehabilitation exercises, their parents learned about the importance of nutrition. The ship’s dietician gave them valuable information about crucial nutrients, like calcium, before sending the family on their way with plenty of vitamins to aid the girls’ healing.

“They told us about the importance of eggs, fish, and vegetables,” said Mymoona. “We will be sure to tell the other families in the village so it can help us all.”

Volunteer Physiotherapist Meg Crameri worked with the girls during their rehab sessions. She hopes this nutritional advice will be shared to help other families whose children might otherwise end up suffering from similar conditions.

“If you are from a poorer area where nutrition isn’t a top priority, then it’s not surprising that this occurs,” said Crameri. “One of the big ways we can change that is by making sure they do it right when they go back home.”

Salamatou and Mariama returned to Bororos with newly straightened legs! And Debo and Mymoona returned ready to share what they had learned about nutrition during their time on the Africa Mercy.

“The route down the mountain was too much for the girls before, and I thought they would never go down. Their lives are far better now, far improved,” said Debo. “Now, they will be able to commit to school and use their education. Before, my heart was anxious for my family, but now I am content.”

Give a gift today and help others like Salamatou and Mariama 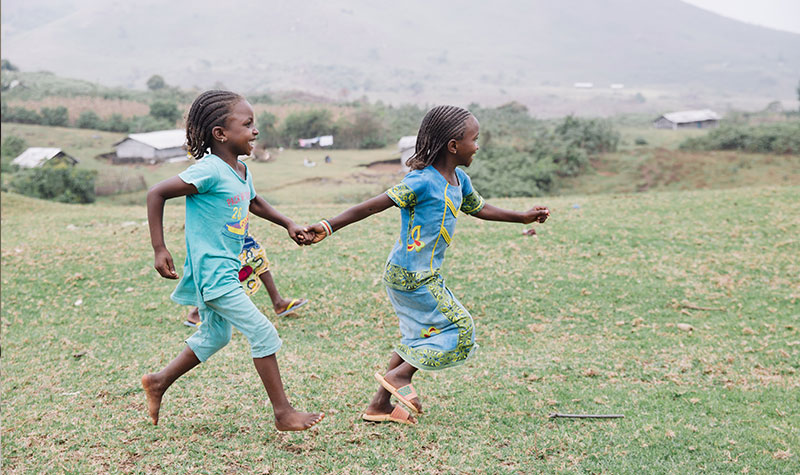