Adama was blinded by cataracts. Thanks to Mercy Ships supporters she had her sight restored. This is her story… 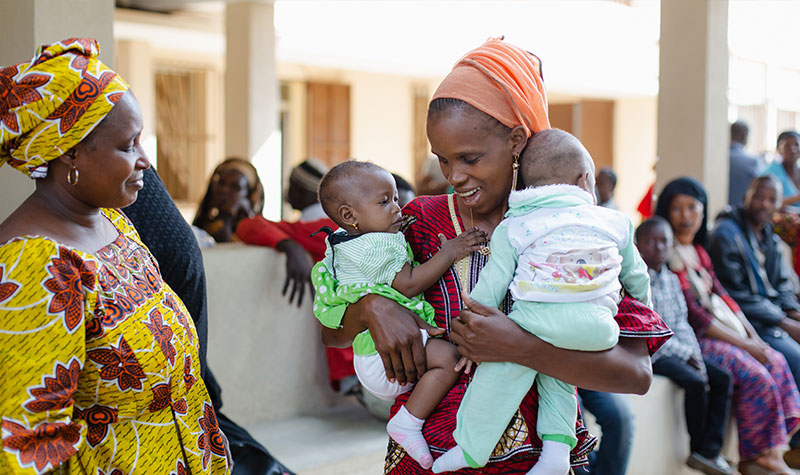 Adama was five months pregnant when the world around her started to flicker and fade. As clouded, disc-like cataracts developed in her eyes, soon all she could see were shadows and shapes. As the months passed her vision continued to dim.

“Maybe it will clear up after I give birth,” she told herself, hoping that the loss of sight was somehow linked to her pregnancy. But once she’d delivered her twin babies, a boy and a girl, 30-year-old Adama had to face the truth. She was blind. She would never see the faces of her beautiful babies. Adama had no access to affordable, safe surgery to restore her vision.

“I held my babies after they were born, and I couldn’t see their faces. I thought this would last forever; that I would never know what they look like. I was very desperate,” Adama said. “I didn’t have any hope.”

Adama and her family moved in with her older sister, Aissatou, who became their caretaker. Aissatou welcomed them lovingly, but with her own children to take care of, the burden was heavy.

For Adama, the reliance on her sister was challenging in a different way. The sudden inability to take care of her own children left her feeling guilty.

“Since my eyes are dark, I can’t walk alone, go to the market, cook, do laundry… I can’t do anything without help.” Adama’s blindness lasted for almost a year, but then Adama’s husband heard that Mercy Ships was coming to Guinea.

For this family, the arrival of the Africa Mercy and its onboard state-of-the-art hospital meant more than just free surgery. It meant giving Adama the chance to step out of the darkness. It meant empowering her to take care of her family instead of depending on others for help. It meant seeing her loved ones again. It meant hope.

Adama’s surgery took about 20 minutes, 20 minutes is all it took to restore her future. When it was time for Adama’s patch to come off, as the patch was peeled back, Adama kept her eyes closed for a few moments. Would her sight be fully restored?

“I never expected that my babies would be so beautiful,” Adama murmured.

Gradually, Adama opened her eyes. A smile slowly spread across her face as she realised she was seeing the world again for the first time in almost a year! Her family members, gathered nearby, were some of the first people Adama saw. She walked by herself to greet them, no guiding hand needed.

“When I die and will go to paradise and meet my own people there… that’s what the moment was like.” She reached for her twins, drinking in the details of their faces for the first time. Tiny noses; long eyelashes; round cheeks – Adama cradled them both in her arms at the same time, eyes dancing between the two.

“I never expected that my babies would be so beautiful,” she murmured. The cataract surgery Adama received with Mercy Ships took less than half an hour, but the impact of her restored sight will reverberate throughout the rest of her life. There will likely be countless moments where Adama rejoices because of the ability to see again —but it’s hard to imagine a moment more meaningful than a mother’s patient love being rewarded with the sight of her children for the first time.

Give a gift today to transform more lives like Adama’s.

Give a gift today and help others like Adama