Georgia and Peter Ainsworth serve onboard as a writer and mechanic.

We first heard about Mercy Ships at Spring Harvest in April 2016 and we volunteered because we wanted to put our faith into action. We fell in love with the simplicity of Mercy Ships core values and desired to be part of their message.

We needed to raise about £24,000 in our first year to cover 12 months of crew fees, living costs and flights. We also had expenses back home such as storage costs for the items that we didn’t end up selling. When we first got to this figure it was slightly overwhelming but God was clearly behind it, because in less than 4 weeks we had more than we needed and with very little effort. We set up a Just Giving page, which we advertised through Facebook. Our church took a collection for us and we approached various friends and family and asked if they were willing to support us with a monthly donation. Most of our funds came from one off gifts – when people heard what we were doing, they were shocked and inspired enough to give (and give generously!).

We left the U.K at the beginning of June we didn’t even reach Africa until mid-August due to the training in the U.S. (something that all long-term crew must do), the shipyard period in Las Palmas and the two-week sail. We had almost forgotten why we were doing this, then one day we saw a group of potential patients arrive on the dock for screening; children with bowed legs and men and women with tumours. It hit us. Up until then, we had only seen these case studies online and through the marketing mail, and yet here they were – real people who needed real help. The mission suddenly became tangible.

They aren’t strangers for long - in no time they become your family.

Sometimes we have to pinch each other that this is really happening, that we actually live on a ship off the West Coast of Africa. It’s pretty surreal! People often ask what it is like to live among onboard a ship with strangers, but they aren’t strangers for long – in no time they become your family. It’s changed our outlook on life and how we hope to live when we get back home. It’s also been a huge blessing to our marriage.

When we are not working, we enjoy exploring the local area and hanging out with friends. There are always lots of activities going on both on the ship and off the ship. Being here longer term makes you take things at a slightly slower pace – it’s an endurance race! It’s ok to want to relax and do nothing one weekend! It took us a while to get to this mentality though because you feel like you should be doing something fun and adventurous every weekend because you’re away from home. But we soon realised that doing something every weekend wasn’t sustainable for us!

If you are thinking of volunteering? Life is short. Do it! 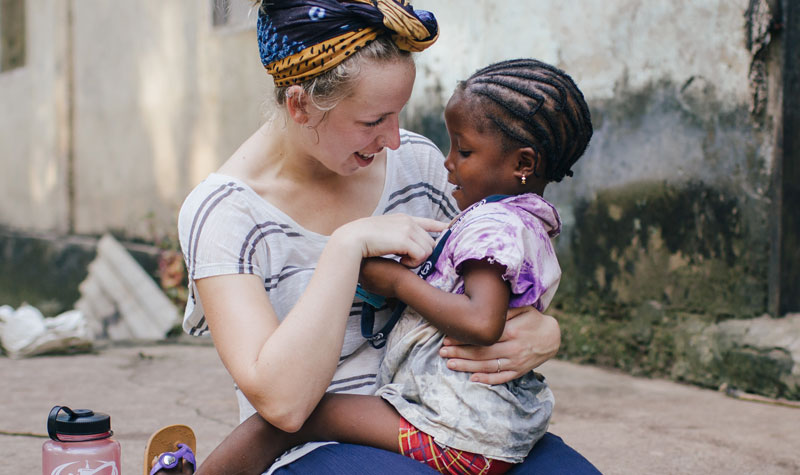 You can support our volunteers by making a gift today