The vicar who became an Iron Man 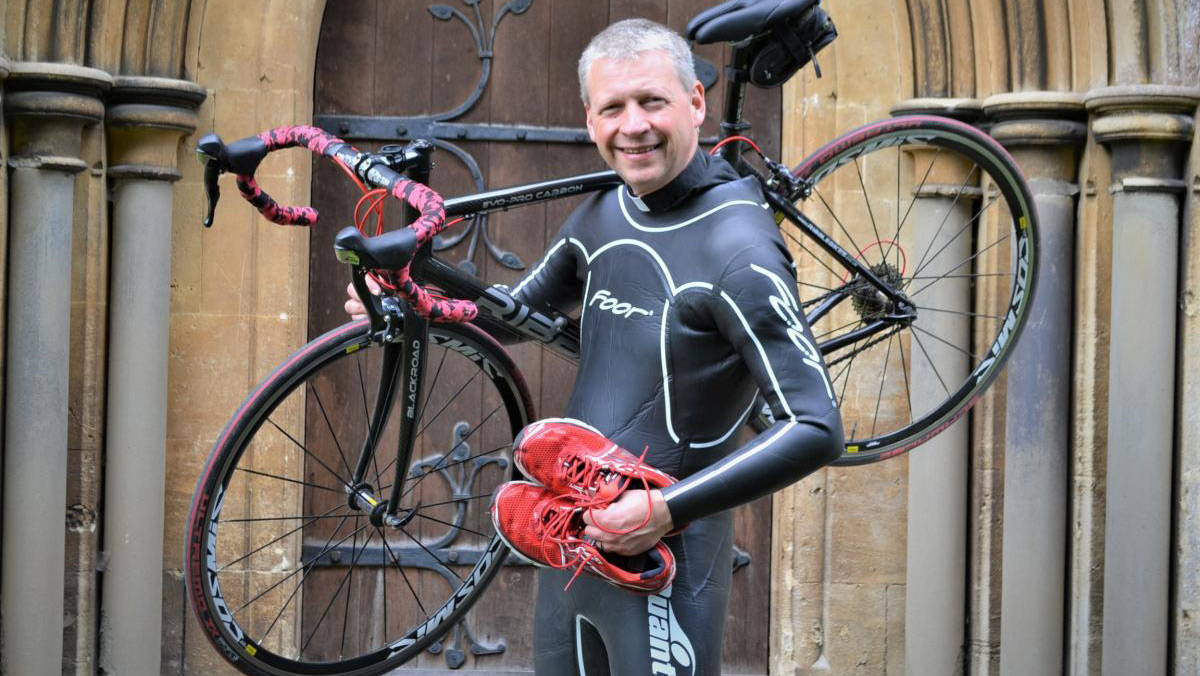 23 Feb The vicar who became an Iron Man

Last summer, Reverend Howard Gilbert from Cirencester completed a gruelling Ironman challenge in Sweden, raising more than £5,000 for Mercy Ships in the process. He ran, swam and cycled for more than 140 miles non-stop.

So why did he do it? We asked Reverend Gilbert to tell us his story.

“I decided I wanted to use my position in the community (as a vicar), to raise funds for a good cause.  I chose Mercy Ships because they are the best charity I could think of, and I chose an Ironman because it was the toughest challenge I could think of (and therefore raise the most money).

“Lord Ian McColl spoke to my Men’s Group in Dulwich many years ago, about his work with Mercy Ships. I was particularly inspired by his presentation, and on the back of that my wife and I completed the London Triathlon, raising funds by sponsorship. We raised about £3,000 as I recall. We were particularly keen on Mercy Ships because:

“I chose a triathlon because I thought doing three different sports would be more fun and better for my body than training for only a single discipline. I also chose it because I love cycling, and because I have bathophobia (fear of deep water), and I wanted to confront my demons.

“Many years on, I was keen to do something similar in my present parish in Cirencester, and when the opportunity to take a 3 month sabbatical from work came up, I thought that completing an Ironman would be achieving something that I simply couldn’t do whilst still at work, and achieve something special with this amazing gift of time.

“I think there was also something of the dreamer in me, and having been in awe of people who have completed an Ironman, I then thought to myself that this would be not just the hardest, but possibly the most exciting challenge I could take on (other than maybe climbing Mont Blanc and skiing back down – but I’ll save that for another day when I’m not being sponsored!).

“I am also a big believer in pushing my boundaries. I talk about it in school assemblies particularly, as I encourage children to be the best they can be. I also remember spending a couple of weeks in the Great St. Bernard Monastery (in the mountains between Italy and Switzerland where they first bred St. Bernard Dogs for Mountain Rescue). They now run Christian retreats where they go rock climbing during the day.  They say that “to find God you must first find yourself, and to find yourself you must first lose yourself”.  And I would certainly say that I learned a lot about myself, both through the training, but especially on the day itself.

“The hardest part of the training was fitting in the time. Before finishing work and starting my sabbatical I was often up at 5am, doing 2 hours plus on the bike and running, whilst watching the sun come up. It is then quite difficult to keep your energy levels up all day.

“In particular I found the swimming very frustrating. I am a very slow swimmer and despite having swum 2-3 times a week for four months, I still found myself in the slow lane at the pool. My swimming hit rock bottom, having gone on sabbatical and travelling around Scandinavia.

“We stopped in a camp-site in Norward by a fjord which had some very deep and dark water. With my bathophobia I couldn’t do much but swim up and down the short beach, worrying about how I would ever manage to swim in the sea on the day.

“I was determined not to fail, but I burned a huge amount of nervous energy that day and spent the next 48 hours continuously hungry! Fortunately when we arrived in Kalmar for the event, the sea was brackish and light, and with everyone else around me I was fine. I am now much more confident in the sea than I was.

“The 2.5-mile swim on race day went remarkably well, and I came in 15 minutes ahead of my target time!  112 miles on the bike went really well – it was beautiful, and there was a huge amount of support at the roadside.

“Starting the marathon I felt strong, and emotionally pushed along by the partying Swedes at the roadside, I made fast progress for the first 18 miles. Darkness then fell, the parties moved indoors, and a lot of my fellow competitors had now finished. It felt like the darkness around me was seeping into my soul!

“I started running slower and slower and slower as I headed out onto my final lap of three through the forest. As so many people had sponsored me, I was determined not to walk any of this running leg of the event. With four miles to go, I gave myself a good talking to. I told myself that if I continued at this speed I would lose the will to live, even if I did come in inside the 16-hour cut-off.

“I slowly upped the pace, pushing through the pain in my muscles, and as I ran back into town, the crowd buoyed me up, and my smile came back! Struggling in the darkness for an hour then made finishing with a smile even more special.

“At the time I said I would never do another endurance event for as long as I live. But maybe when I retire, I might just see if I could beat my original time. Having learned so much on the day, I feel I could go so much faster. But, then, there are so many other exciting challenges out there – how do you choose which one next?! For the moment, however, I’m definitely sticking to sprint distance challenges!

“I encourage everyone to push their limits and discover their hidden depths. Being sponsored to complete a big challenge gives you a double benefit – you benefit hugely for having completed it yourself, but you have also done something amazing for some of the most disadvantaged souls on the planet.”