The Love Boat: How one couple found love while volunteering on a hospital ship 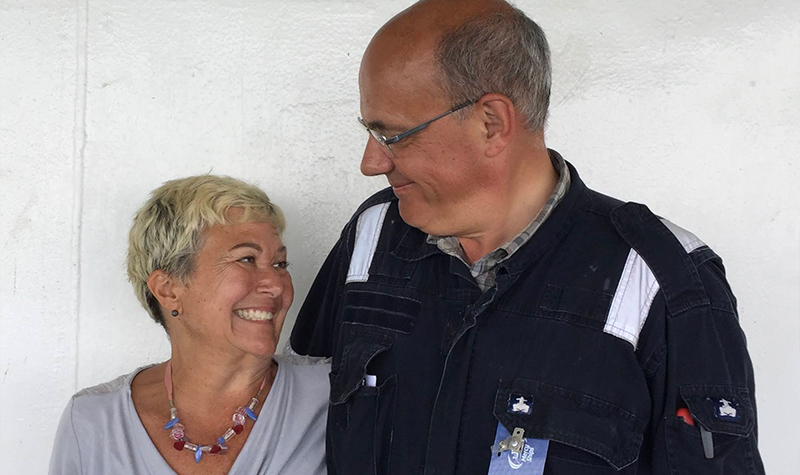 01 Jun The Love Boat: How one couple found love while volunteering on a hospital ship

Neither Irene Blotsky nor Nick Granger-Brown was looking for love.

But as the Canadian and the Brit boarded the same plane to West Africa from Belgium, then the same transport to the same hospital ship and were put in neighbouring cabins, they were amused at the coincidence and started chatting.

It was January 19 2020, when they started their journey and they had both signed up to volunteer for the international development charity Mercy Ships.

Irene, a 65-year-old retired nurse from Montreal, and 56-year-old engineer Nick from Hampshire, first spoke to each other while they waited to be picked up by ground transport at Dakar airport, Senegal, as they headed to hospital ship the Africa Mercy for a planned two-month service.

Irene from Montreal said: “I was on the same flight as this gentleman. The same transport to the same hospital ship. Then we were two cabin doors apart. I think it was meant to be!”

Mum of three, Irene had spotted an article in the Montreal Gazette five years before about a hospital ship that brings accessible, free surgery and vital medical care to the world’s poorest who have no access to surgery. In 2018, the then divorcé, volunteered in the ship’s dining room in Cameroon, as her nursing licence had expired.

She said: “I thought the dining room would be a great place to meet people – and I was right. It was life-changing. It was great to be with all these people. I’m a very social person.”

But the impact of the incredible need out there had a lasting effect on her.

She said: “I was a nurse for 38 years and I was shocked. It’s so sad to think that these people, if they had access to medical care, would not have had all this emotional trauma and ostracisation from their communities because of their deformities and their growths.”

When she returned to volunteer in 2020 and met widower Nick, her life changed more than she had imagined.

“I was not looking for romance on the ship as some people do. It was the furthest thing from my mind. I was my own woman, happily travelling. I said if I ever meet someone, it had to be the knight in shining armour – otherwise, I’m not interested.”

But it soon became clear that they were set to be the latest couple to meet through Mercy Ships. Since 1980, more than 520 couples have met and tied the knot after volunteering for the charity.

Irene said: “We struck up a friendship and spent a lot of our free time together – we became inseparable. We even had a couch in the lounge which we made our own. It ended up being called the love seat by others that passed it!”

Widower Nick, who lives in Waterlooville, Hampshire, had heard about Mercy Ships at the Christian festival Spring Harvest in 2018 and was keen to get involved and offer his skills after being an engineer the past 35 years. His wife died of breast cancer five years before.

“I like being an engineer and problem-solving, but I wanted to do something that had more of a direct impact on people’s lives and it seemed like Mercy Ships – to help a hospital ship – was the ideal opportunity. I joined as the electronics technician, and it was amazing to do something I was familiar and with such a worthwhile goal.”

But just before their two months were coming to an end – the pandemic struck and the pair had to make a decision. They decided to stay on for as long as possible to do what they could for the ship, but also to be together.

Irene said: “COVID-19 was actually a great thing for us personally. We got longer to get to know each other.”

Mercy Ships continued with land-based projects in sub-Saharan Africa, sending volunteers to hospitals and clinics and supplying PPE to tackle the pandemic. Meanwhile, the hospital ship was taken for refurbishment work with a reduced crew giving the pair extra time to get to know each other before Irene had to leave for home.

She said: “I was bawling my eyes out because I did not want to leave Nick. We had had such a special time together. There were 150 of us on the ship in quarantine. No one came off, no one got on. We were like one big family. We said we are just like teenagers. I just wanted to be together – that’s what it’s like when you fall in love.”

Nick stayed on board to carry on vital electronic work and admits it was not just Irene he had fallen in love with.

“I’d fallen in love with the ship too. It was fun and it was keeping me busy. The Africa Mercy is a lovely ship, and an older ship so there is always lots to fix there so I was always busy. And I was busy doing something that was supporting a cause that was making a lot of sense to me, so it was so much more than a job.

“It was a real-time of fellowship. It was a very special experience which I hope we will be able to participate in again one day.”

They went their separate ways on June 15 but spoke every day until they were reunited on August 1 2020 in Hampshire. Irene fell in love with England and their relationship went from strength to strength.

It would be Easter 2021 when Nick popped the question officially. When Irene had not opened her big chocolate egg on the table from Nick, she got a little reminder.

Irene said: “He said to me, ‘Aren’t you going to open your egg?’ And I said ‘Yeah, I’ll get to it later!’ But when I did, I discovered a little box and there was a ring inside! I got my knight in shining armour.”

Their wedding was booked for December 29 2021 but with restrictions introduced to combat the Omicron variant guests found it hard to travel. The pair faced a difficult decision to go ahead with the registrar and just a handful of guests but were anxious to make their relationship official.

Their ‘real’ wedding is scheduled for July at the 16th-century townhouse, Pelham House, Lewes, and they cannot wait.

Irene said: “It will be a proper English wedding – we did not get dressed up for the first one. Even my little grandson will be wearing a morning suit.”

Instead of receiving wedding gifts, they have asked people to give donations to Mercy Ships via JustGiving.

Irene added: “If it were not for Mercy Ships we would not have met. We both believe in what Mercy Ships does. A whole bunch of people getting together from all around the world and volunteering to change people’s lives – and now with the Global Mercy bringing so much more with its teaching aspect, I’m so excited.”

We are so grateful to all our crew and for sharing their adventures onboard with you. Thank you, Nick and Irene, for all you have done for Mercy Ships and we are so happy that you found love onboard. There’s a unique space waiting for you onboard too visit:  https://www.mercyships.org.uk/setsail/