Teacher who is self-proclaimed ‘Miranda’ bringing laughter to hospital ship 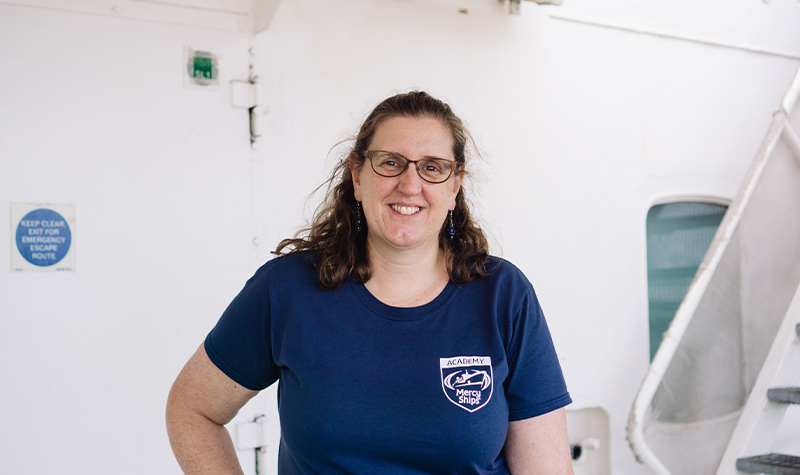 Ruth Cooper believes teaching has always been her blood and, combined with a sense of adventure, the 45-year-old has found her perfect niche teaching onboard a hospital ship bound for west Africa.

Since she was a little girl, Ruth Cooper’s favourite thing to do was to pretend to be a teacher. Her mum was a teacher and so was her aunt, and she single-mindedly felt that was what she would do too.

“I wanted to be a teacher from the age of seven. I used to do a register for my teddies and make them worksheets. I loved it,” she said.

Ruth, from Wellington, Somerset, didn’t have to role-play for long. Just over a decade later, she was at Westminster College, Oxford, reading a Bachelor of Education in theology and teaching and then back in the southwest teaching at a small primary school at Chulmleigh, Devon, where she became an RE co-ordinator.

But she hasn’t always been the outwardly confident woman she is today. Ruth admits growing up wasn’t easy and she and many others compare her to Miranda, the above-average height lead character in BBC comedy show, starring Miranda Hart.

And who she is, is an accomplished and talented woman with a healthy dose of comedy genius, just like the sitcom character, who finds herself in a series of awkward but hilarious situations.

“I’ve had many great Miranda moments! I went to visit this school that I had heard there was a job at and I was talking to the headteacher about the job while we were walking around.

“She was showing me around when I put my foot down a hole, it got stuck and I fell over! I twisted my ankle so much I couldn’t walk! So, we had to spend the rest of the time with me sat down and chatting. It was so like Miranda!”

Despite her slapstick real-life antics, she was invited back for an interview and got the job.

Her successful, rich, and varied career has seen her teach in a wide range of global schools – bringing plenty of fun to her role.

At age 30, Ruth moved to Nairobi, Kenya, and worked for an international school. Here she got valuable experience teaching 28 nationalities and lived onsite with her bedroom next to the school staff room. “I had an even quicker commute to work than here on the ship!”

“It was a huge privilege. Two years were extended to three and I became head of juniors.”

The experience made her fall in love with Africa but she was to return to London and work at the prestigious City of London School for Girls in the Barbican.

When she walked into the interview, she passed actor Sir Ian McKellen in the corridor and felt like she was experiencing another Miranda moment and found it hard not to ask her interviewers if she had imagined Gandalf coming into her interview.

“My last class there were absolutely convinced I was Miranda!”

It was here that she first heard of Mercy Ships when someone did an assembly on the charity. She loved the idea of volunteers bringing their unique skills to serve those who need it most in west and central Africa.

“I’d just come back from Kenya but I stored it in my brain because it wasn’t the right time.” Soon after a friend suggested it to her and then again in another school assembly.

“I thought, this is the third time I have heard of Mercy Ships now and I had got to a point where I felt I was struggling a little with the UK education system so I looked to use my skills in an environment where I could love teaching again – and I found it, here at Mercy Ships.”

The experience onboard the hospital ship Africa Mercy is living up to everything she expected it to be – and more.

“We can do so much more than I could in a normal classroom. It’s not a breeze at all, it’s almost more because you can plan more and see entire projects from start to finish and give everything the time it deserves. For example, we made periscopes last week, learnt about them and went out and used them.

“I have always been interested in ministry work but I have never been confident in speaking about my faith. Through volunteering, I can put my faith into action without words but through my actions.”

Ruth has been promoted to lead elementary teacher and is loving the unique Mercy Ships experience.

“I have taught small classes before this but these children know they are here for a reason, while their parents serve in all sorts of roles, so I think they value it a bit more. It’s surprising how living on a boat has become normal – it just become natural.

And as the hospital ship set sail for Senegal – she had one minor problem to deal with that she hoped would not result in any more Miranda-style comedy moments.

She added, “It turns out I am seasick! But it’s fine when I do outdoor lessons so we might be doing a few of those when we travel to Senegal! We are all so excited to get there! I’m someone who panics but I am so godly calm about this. It’s a good feeling.”

We are so grateful to our incredible UK crew, like Ruth, for all they are doing. Are you ready to join use your unique skills to transform lives like Ruth? Learn more about how you can Make Your Mark here.