Rising through the ranks: how dedication and being trusted with responsibility reaps rewards 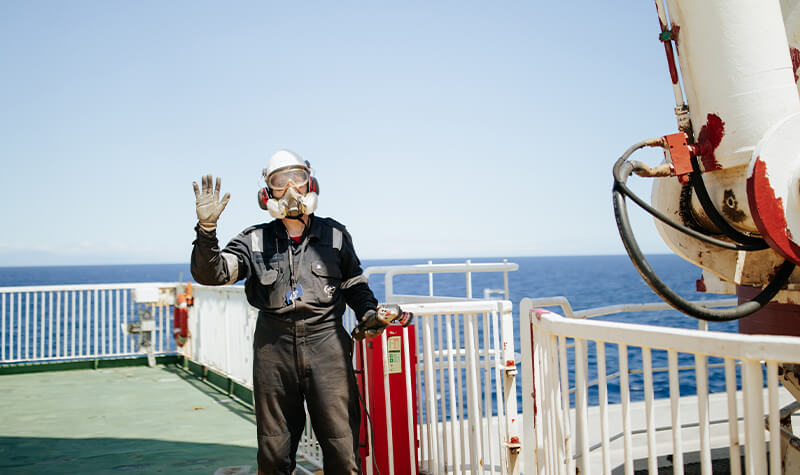 06 Apr Rising through the ranks: how dedication and being trusted with responsibility reaps rewards

Alastair Edwards rose from able seaman to the third officer and then the second officer during ten months volunteering onboard the hospital ship the Africa Mercy. He looks back at his rewarding but demanding time in the second instalment of his Mercy Ships journey.

Alastair Edwards is astounded at what he has achieved through hard graft in his ten months volunteering for Mercy Ships.

We first caught up with Alastair just days after his arrival onboard the Africa Mercy in May 2021 . His irrepressible optimism for what lay ahead was contagious.

“I’m a completely different officer now from when I started. Everything I have been doing over the past 10 months, they are things I knew of from college, but now I truly know them. I know them so well, that I was teaching them to others.

“I’m still an optimist. I could not have asked for more. It was the best job.”

The 27-year-old arrived as an able seafarer from the Outer Hebrides in Scotland, with his guitar on his back to volunteer for ‘a few months’. But a few months turned into almost a year and one that transformed the now 28-year-old.

Now he is encouraging other cadets to do the same.

He says nothing really prepared him for the supportive atmosphere he found onboard that he noticed as soon as he arrived.

Alastair said, “Most commercial ships have tensions but there is nothing like that onboard. The crew are amazing, and everyone genuinely wants to be there and gets on.

“People learn each other’s names, not just their rank. I have been on a lot of ships where they do not learn names. But it’s more than that, it’s much bigger than the crew – everyone is there to help, and you know you are doing good, so you feel good. You’re making a difference and you become friends.”

During the pandemic, refurbishment work was done to the Africa Mercy to ensure it could keep working successfully as a hospital ship for another 15 years plus. Alastair joined as able seafarer working hard chipping and painting and working on planned deck maintenance along with other roles, that were pivotal to its success.

But as the ship took shape preparing to return to Senegal in February 2022, Alastair took on more and more responsibility.

“I was trusted with responsibility early on and showed what I was capable of. I always had a strong work ethic. My dad told me to always work hard so I always make sure I do. But with this, you are working for a much bigger cause. I’m used to long hours, and we all knew that everything we did was extending the life of the ship and the amount of people who would get treated in Africa. You know the whole time that you are part of something much bigger.”

Alastair lost his dad to a heart attack when his dad was just 52 and Alastair still a teenager.

“He was my best friend as well as my dad,” said Alastair.

His dad had an amazing sense of empathy that Alastair holds dear. And he says he could feel that similar empathy in the people around him on the Africa Mercy.

“Everyone helps each other to do their best. We were working as a team and seeing the chance to see people develop and help them. Everyone is there for the same reason.”

He says this camaraderie was vital in stressful and busy times. As he took on greater responsibilities such as firefighting and life-saving provisions as third officer there were many firsts for him.

“I took on a lot of responsibility and worked very hard training and on navigation and safety.

“When we were in dry dock, we were working long hours and staying on the ship. It was hot at night and noisy, and I kept reminding myself why I was doing it – for people suffering from a lifetime of disability and disfigurements. You remembered why you are doing it all the time.”

But his hard work was recognised by his superiors too – and he was promoted to second officer. He was even responsible for navigation and passage planning for the much-anticipated route to Senegal, from berth in Tenerife to Dakar as the ship returned to service.

“For me that was a huge thing for my experience. I got everything I ever wanted from the job. It was a vibrant workplace. I worked hard and it was challenging but I was happy in my work.”

Even his guitar playing has improved.

“I took my guitar thinking I would play all alone in my cabin like I have on other ships but this was completely different! I was playing late at night in the international lounge. Everyone makes an effort to keep a good atmosphere It’s hard work, a physical work but you are working with friends for a common goal.

“It’s such a nice atmosphere to be part of.”

For now, Alastair has just returned to Carloway on the west side of Isle of Lewis while he takes stock and plans his next role. Although he needs to enter a paid for role for now, he plans to return to Mercy Ships one day.

“I would love to go back one day. There’s nowhere else like it.”

No matter what your skills, there’s a place for you onboard, click here to find out more!