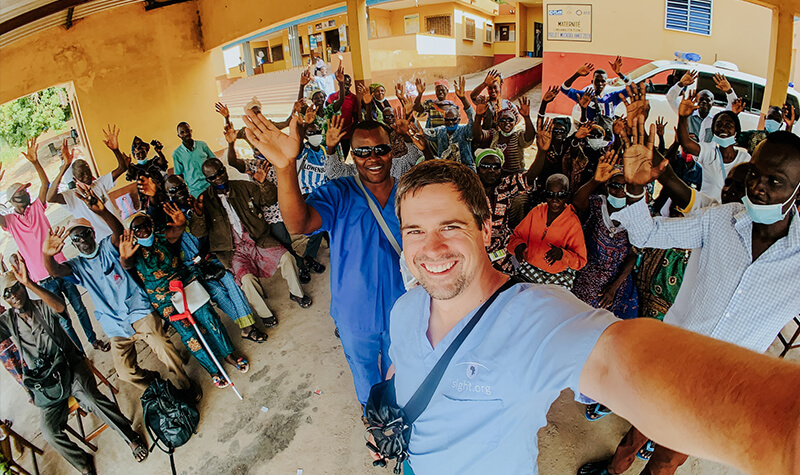 Posted at 16:33h in General by Tim Farquhar
0 Likes
Share

Lewis Swann was 10 years old when he heard a message from a renowned evangelist. His young heart was greatly impacted, and he knew his life calling was to help people in Africa. Years later, he was living out this dream as a volunteer onboard the Africa Mercy.

During his three years as public relations coordinator, Lewis helped tell the incredible stories of the patients that Mercy Ships supporters help and the transformations happening onboard. Along the way, he discovered a newfound faith that began to change him from the inside out.

While volunteering with Mercy Ships in Togo, Lewis’s eyes were opened to a very real need. But seeing wasn’t enough. Lewis wanted to do something.

“I realized I’m not supposed to leave Africa… but I didn’t know what that was going to look like. When I asked God for my calling, it felt like jumping off a cliff,” said Lewis.

Two years later, in 2012, Lewis founded Sight.org. This charity provides free eye surgeries in remote regions of Togo. Inspired by the Mercy Ships model of hospital ships, Lewis decided to carry out his mission via a mobile clinic.

“The reason we go remote is because nobody is going there. Mercy Ships has such a great platform because it goes to the ports where there’s the biggest populations. We’re a similar model. What the ship does in ports, we do in-land to remote places where doctors just don’t go.”

With a team solely made up of Africans, some with a history serving with Mercy Ships, they travel by van with sterilisation and operating room supplies packed tightly on top of the roof. Included in the team’s gear are tents and cooking supplies. Together, the team traverses the 21,000 square miles of Togo, setting up shop in local hospitals for three weeks at a time. It’s just enough time to screen for local patients, provide pre-operation examinations, perform surgeries, and then care for patients after surgery. And then, on to the next village.
It’s an amazing feat that’s seen thousands of patients’ vision, and entire lives, transformed.

“We started with 11 patients. In our first year, I think we did 37 surgeries. And now we do up to two hundred surgeries in a week.”

Dr Avia is Sight.org’s lead surgeon, who jokingly calls himself “the grandchild of Mercy Ships.” He was trained in the Manual Small Incision Cataract Surgery (MSICS) method by Mercy Ships partnering surgeon, Dr Abram Wodomé, who runs a cataract clinic and training program in Togo (you can check out his story here!). Now, Dr Avia continues this legacy by training the next generation of cataract surgeons himself.

Under Lewis’ guidance, Sight.org has been performing surgeries for nearly a decade. In this time, more than 3,500 patients have had their vision restored through cataract surgeries.
Patients just like Alice and Edom. At 12 years old, Alice had never known life without the congenital cataract blinding one of her eyes. Her limited vision made it difficult to see the school chalkboard and follow the words, slowing her progress.

Her neighbour, Edom, had lost vision in one eye a few years ago. Early mornings were particularly difficult for him to navigate, as well as after nightfall. At 16 years old, he was hoping cataract surgery would improve his vision and give him a healthy future.

Both Alice and Edom received surgery, and both were a success! Only days afterwards, Alice was playing hopscotch with her friends while Edom was back to his latest venture: learning how to play the piano.

Back in 2010, when Lewis was first on board a Mercy Ship praying about making a difference, he had no idea how his passion would manifest. But 10 years later, there’s no question that this former volunteer has made his mark. And a decade later, Sight.org returned to its roots, with Mercy Ships offering to sponsor approximately 1,000 eye surgeries in 2021, doubling its number of annual surgeries.

You never know where volunteering will take you. With a willing heart and an adventurous spirit, applying to come onboard is only the beginning. All you’ve got to do is say yes.
Learn more at mercyships.org/makeyourmark