On the crest of a wave: the start of one volunteer’s adventure 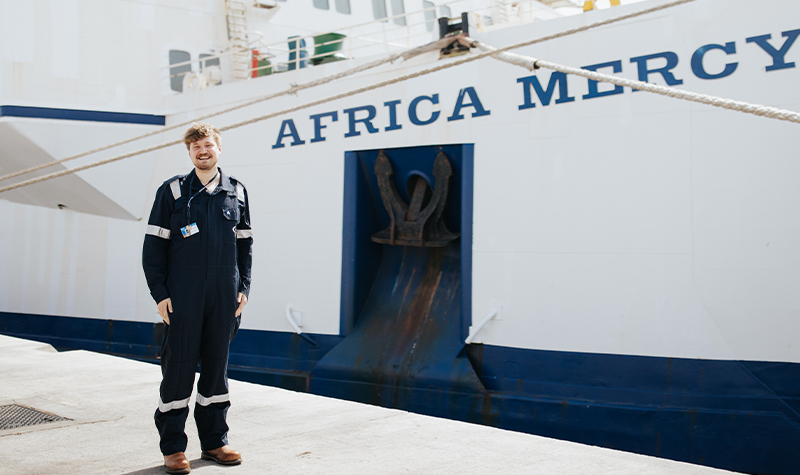 02 Dec On the crest of a wave: the start of one volunteer’s adventure

We caught up with one brand-new volunteer crew member just days after he had arrived onboard the hospital ship Africa Mercy in May. Here is his story then. Watch out for his next instalment in his Mercy Ships journey soon.

Alastair Edwards admits he had an overly romantic view of life and working on ships.

But as he talks of the beautiful sunsets he can see out of his cabin window and his zest for what is to come and who he will meet, it’s clear to see he is still wonderfully idealistic.

He may just have arrived on the Africa Mercy, been in quarantine for days and hardly met anyone, but his enthusiasm and optimism is contagious.

“Everyone has been so friendly! It’s so nice!” he exclaimed.

Even Alastair’s backstory sounds romantic. The 27-year-old left his life in the Outer Hebrides in Scotland, packed up his guitar and jetted off to volunteer on a hospital ship.

Then he found himself following in his grandfather’s footsteps.

When Alastair completed his history degree at the University of Strathclyde, he felt driven to have a career on ships and went on to do a sandwich course at the world-renowned centre of excellence for marine education and training, South Shields Marine School.

Sadly, he was declared medically unfit for the Royal Navy and instead opted to work in the Merchant Navy, just as his grandfather had, and went to work for shipping company Maersk as a deck cadet.

“I always had a romantic view of working on ships. It’s not at all what I expected. Luckily, it turns out I like it too, even though it’s nothing like I imagined! It’s great.”

He heard about Mercy Ships from a friend and went on to read charity founder Don Stephens’ book, Ships of Mercy. This inspired him to volunteer.

“I really loved it. I think the story was amazing. I could not believe I had not heard of Mercy Ships before,” Alastair explained.

He applied to join Mercy Ships in the winter and got a position as an able seafarer.

During the pandemic, work is being done to ensure the Africa Mercy is in prime condition to ensure the hospital ship, that has helped many thousands of people, can keep doing so for another 20 years. The ship is in a dry dock, while the work is carried out to prepare her for a return to Africa.

Alastair’s role volunteering, like others onboard, is pivotal to its success. He will be chipping and painting and working on planned deck maintenance. When she moves on for more work, he will be in lookout position and at night, an additional lookout.

“When I first saw the ship, I just wanted to take it all in. There was a feeling of wow. There were lots of emotions,” he said.

His enthusiasm for his service onboard, which was set to last until October 2021, is one also ignited by family and friends.

He said so many people had told him they wished they had done something similar, and he should relish his experience.

“I think people are re-evaluating their lives right now [because of the pandemic]. Everyone can get a second chance and do something else. People can always do something they always wanted to do.”

For him, he’s doing just that and making sure he makes the most of every moment.

Despite Alistair intending to finish his time onboard in October – he decided he was not ready to head home yet and has extended it! Look out for his next instalment coming soon.

Volunteer opportunities onboard are vast – there is a role waiting for you: Make Your Mark by clicking here.