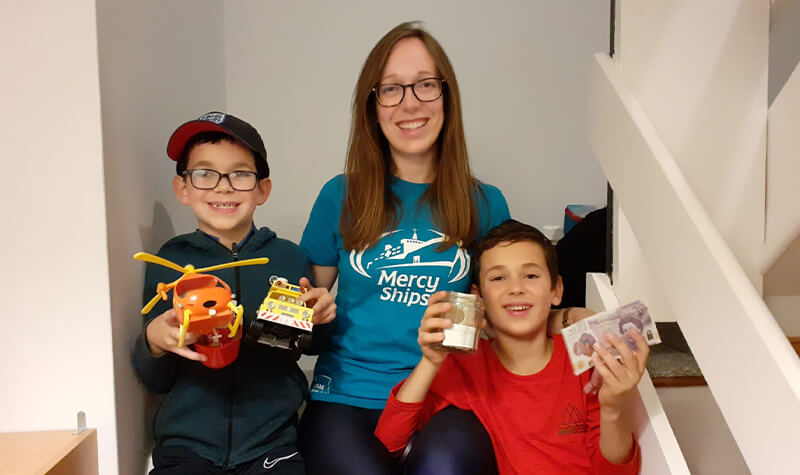 A teaching assistant from Haslemere, Surrey is set to run the Great South Run in Portsmouth on Sunday, October 17th to fundraise towards life-changing surgery in the world’s poorest nations, thanks to a suggestion from her son.

Mum-of-two, Sarah Noble, was toying with the idea of challenging herself to start running again and compete in an event when her nine-year-old son Isaac overheard the conversation.

Sarah, 36, said, “I did a half marathon when I was 22 but really, I have only been a short distance runner and always wanted to give a longer distance a go. I needed to do it for a good purpose. We talked at home about me doing a run and Isaac immediately said, ‘Mum, do it for Mercy Ships.’ As soon as he said it, it was an easy decision to make.”

Isaac had been impacted after hearing about the work of Mercy Ships at the Christian festival Spring Harvest when he was only seven. The charity works to strengthen and support existing healthcare systems in Africa by providing care on its hospital ships and on land by partnering with governments, hospitals and medical professionals.

Sarah said, “At the event, they profiled the CBBC programme My Life, which followed the life of a child called Iona who lived onboard the hospital ship while her parents volunteered. They put it on the big screen, and it has had a big impact on him since he watched it.”

That experience led Sarah, who works at Beacon Hill Community Primary School, to sign up for the 10-mile Great South Run and began fundraising in earnest for the international development charity.

Her efforts have continued to be boosted by her sons.

She said, “Isaac was clearing out his toys and we were selling them on Facebook and he asked if he could give all the money to Mercy Ships too. Then he said to me he didn’t want any of his pocket money and he wanted me to have all his pocket money for Mercy Ships.”

Seven-year-old Caleb also emptied his purse of coins into the fundraising pot.

She said, “They’re my inspiration. They have both been really encouraging. I was only able to do two miles at the beginning and they kept cheering me on and supporting me as I have managed longer distances.

“The way Mercy Ships treats people who need it most for free, changing lives, is incredible and I’m grateful to everyone who is sponsoring me.”

Mercy Ships uses hospital ships to deliver free, world-class healthcare services, capacity building, and sustainable development to those with little access in the developing world. Founded in 1978 by Don and Deyon Stephens, Mercy Ships has worked in more than 55 developing countries, providing services valued at more than £1.3 billion and directly benefitting more than 2.8 million people. Our ships are crewed by volunteers from over 60 nations, with an average of over 1,200 volunteers each year. Professionals including surgeons, dentists, nurses, healthcare trainers, teachers, cooks, seamen, engineers, and agriculturalists donate their time and skills. With 16 national offices and an Africa Bureau, Mercy Ships seeks to transform individuals and serve nations one at a time. For more information click on www.mercyships.org.uk