Mum of two Martha Rodriguez quit her job, sold her house and car and headed to the Congo. She told us why 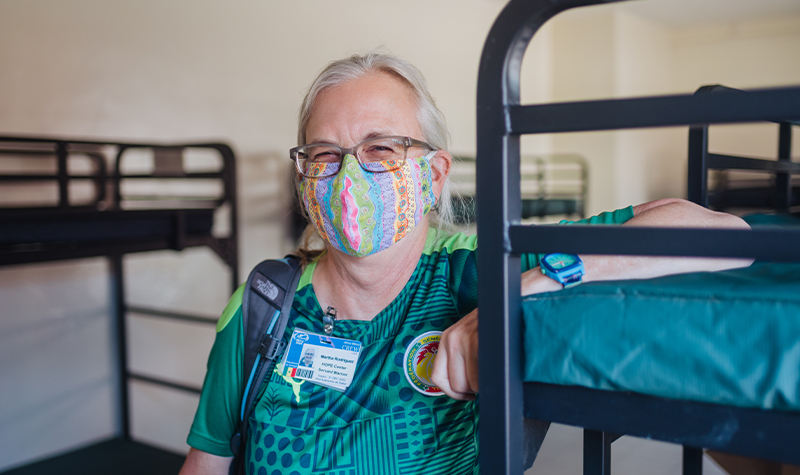 27 Jul Mum of two Martha Rodriguez quit her job, sold her house and car and headed to the Congo. She told us why

Posted at 14:49h in General by Tim Farquhar
2 Likes
Share

Just months after watching a current affairs programme on TV, mum of two Martha Rodriguez quit her job, sold her house and car and headed to the Congo. She told us why – 8 years later – she is still volunteering for Mercy Ships.

She’d been working at a chemical factory for the past 19 years while her two daughters had grown up and as she watched 60 Minutes from her Texas home, she was captivated.

The episode of the CBS show about life on a hospital ship run by Mercy Ships ended up winning best feature story at the Annual News and Documentary Emmy Awards ceremony, but it also changed the course of Martha’s life.

Martha said, “I thought it looked incredible and I wanted to be part of it.”

Within months she had sold most of her belongings and was heading for the Congo to volunteer onboard the very ship she saw featured on TV – the Africa Mercy.

Martha’s adventurous spirit and desire to help others had always been there and had seen her join the Peace Corp aged 23, spending two years in Honduras before working as a civilian in the US Military. With her youngest now 23, she felt ready to go and help others abroad again.
When she arrived in Congo in 2014, she initially volunteered as the dining room team leader and enjoyed working with local day crew and experiencing meeting patients.

She said the Ebola virus taught her and others onboard “great patience” as some field services had to be cancelled as the unpredictable virus took hold; a patience she would need in 2020 also.

In 2015, Martha got a new challenge – she was asked if she could be the manager of the HOPE centre.

Just a stone’s throw from the hospital ships, this is the place which makes the work of the ships and all the volunteers possible. The Hospital Out-Patient Extension Centre, or HOPE Centre for short, is the epicentre of healing and growth for patients who receive surgery. Although no surgery happens here, it is the crucial start and end of their life-changing journey.

Martha said, “I had visited the HOPE centre as a crew member. I could feel God nudging me to take the role. I think it’s a job that always needs good troubleshooting skills and I learned at the chemical plant.

“The HOPE centre is basically a hotel for pre-op patients to stay before screening and admission to the hospital ship and a base for outpatients. They can be there from anything from a week to months.”

Since 2015, she witnesses daily transformations in the HOPE Centre – both in body, mind and spirit – that leave her in awe.

“I would say that from the very beginning when a patient comes pre-op, we look at them for the person that God made them and not the condition that they have. That starts the process for their time with Mercy Ships. We treat them with love and continue to love and help them throughout their treatment and help them to get better after. We don’t treat them any different pre- or post-op.”

For her, some of the biggest transformations are women who suffer from a debilitating condition called obstetric fistula (OBF) caused by a traumatic childbirth due to lack of maternity care.

In Africa, an estimated 2 million women and girls currently endure this unspeakable condition, which often leaves them in pain, incontinent and outcast.

Tragically, sometimes their babies do not even survive the birth and the women are left, not only struggling with their devastating loss, but permanently leaking urine, and sometimes faeces.

Martha said, “You can see how badly they have been treated. They are shy at first about interacting with any day crew or anyone. They don’t make eye contact and you can feel their shame, but you can see the longing in their eyes that they want to be healed. You can feel that even with mothers whose babies have cleft lips too – you can sense how they have been treated. The transformation is incredible when you see them pre- and post-op.”

But it’s not just their Mercy Ships transformation that amazes Martha, but the camaraderie between the OBF patients that just happens naturally. Often this happens even before they reach the HOPE centre on the transport provided to get them there from their remote villages.

“It’s beautiful when fistula patients come and meet each other and realise they are not the only ones. They have often been so isolated and then they meet other patients like them and they end up supporting and loving each other. They start to form bonds on the buses to get to us and even before surgery you can see the difference. The OBF patients often eat together and spend their free time together – their healing starts early on.

“They are incredible women because of what they have had to face, a lot of them have even lost the babies they were trying to have. They are also the bravest people because often they have come from the bush and they are experiencing so many things for the first time and yet, they put their trust in us.”

Some patients grow incredibly close to staff as they spend months in the HOPE Centre.

One memorable patient for Martha is baby Paul. When he first arrived on the dock of the Africa Mercy cradled in his mother’s arms, Paul was a ghost of a baby. He was born with a cleft lip and palate that made it nearly impossible for him to nurse, and at just three months old he was slowly starving.

Martha said, “We became friends with his mother and shared in her joy watching Paul get better. It was amazing when he was able to have his surgeries because he had put on enough weight. His transformation was incredible.”

Martha said the joyful transformations she witnesses are unique and means it is the place she wants to be.

She said, “They are joyful, relieved, and grateful. Most of our parents, most profusely, thank us for the care they have received but you feel often that we have got so much in return just watching their transformation. We get so much in return – I love it.” 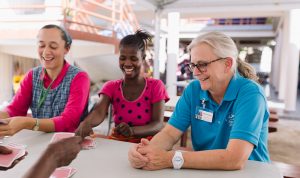 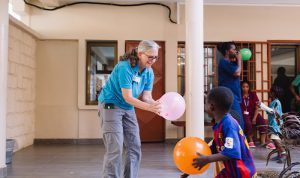 Martha with patients at the Hope Centre