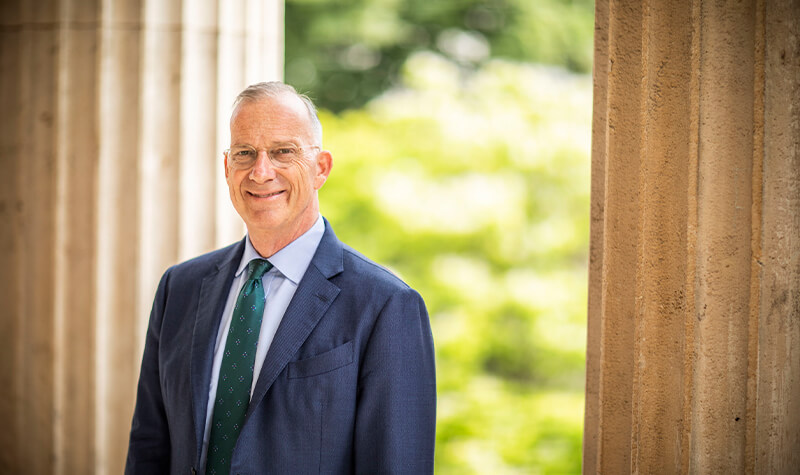 Dr Michael Spence, President & Provost at UCL, is announced as Mercy Ships UK’s new Chair of the Board of Trustees.

Dr Spence moved from Australia last year to lead UCL, a top ten university in the QS World University Rankings. He is a respected legal scholar and a one of the pre-eminent international leaders in education. He was previously Vice-Chancellor & Principal of the University of Sydney and is a Companion of the Order of Australia.

Dr Spence led a campaign that raised over $1 billion Australian dollars at the University of Sydney. He arrives at an exciting time for Mercy Ships UK with the charity doubling its ability to save and transform lives.

“Mercy Ships does the most incredible work to save and improve lives and address global health inequalities through effective direct action and through working with local partners. It is a huge privilege to be able to play a part in that work as Chair of Trustees and to support the staff, volunteers and donors whose passionate commitment is rapidly expanding our reach and the number of people to whom we can bring much-needed care.”

“We are delighted to welcome Michael as the new Chair of the Board of Trustees.

“Michael brings to Mercy Ships a tremendous heart for the work as well as his significant experience as a greatly respected global leader in higher education. His appointment comes after a careful and thorough search process. We look forward to working together at this most exciting of moments for the Mercy Ships family – to the benefit of those in need of hope and healing.”

Dr Michael Spence succeeds Henry Clarke, a founding trustee of Mercy Ships UK, who moves on to become an international director of the Mercy Ships Foundation Board.

“I want to place on record my sincere thanks to so many donors, supporters, partners, volunteers, fellow trustees and staff for making Mercy Ships UK and the greater Mercy Ships’ global mission what it is today. The commitment and verve which I experienced when I first came into contact with Mercy Ships 43 years ago has never dimmed as the mission continues to put our patients and their health transformation above all else.”

“Henry has dedicated almost 40 years to Mercy Ships, and we are all extremely grateful for his dedication to the mission of providing hope and healing to the people of Africa.

“His contribution to Mercy Ships UK as a supporter, Trustee and ultimately Chair has been invaluable to the organisation over many years and we sincerely thank him for his service, particularly his leadership in helping Mercy Ships UK grow over the last 10 years.

“Henry has helped lay the foundations for the next chapter of Mercy Ships UK and we wish every blessing for him and his family in their next chapter.”

“Dr Spence joins us just as we launch our new ship, the Global Mercy, and I’m excited to work with him in the next stage of changing lives, through our work to bring hope and healing to people with little access to healthcare in the developing world.”

Dr Michael Spence AC joined UCL as President & Provost in January 2021. Prior to this, he was the Vice-Chancellor of the University of Sydney (2008–2020). Under his leadership, it has risen to first in Australia and fourth in the world for graduate employability.

He embedded diversity and inclusion in the university’s culture, delivered significant investment in multi-disciplinary research activity, transformed the undergraduate experience and created strategic partnerships with leading industry, government and community organisations across the globe.

As Vice-Chancellor, Dr Spence has been responsible for raising a record one billion Australian dollars through the INSPIRED philanthropic campaign – the largest philanthropic campaign in Australian history. This fundraising has transformed the university’s campus by funding major new research and education centres, bringing resources to life-changing medical research and providing more than 2,000 scholarships and education initiatives for new and existing students.

Dr Spence is recognised internationally as a leader in the field of intellectual property theory and holds a Doctor of Philosophy from the University of Oxford, where he headed Oxford’s Law faculty and Social Sciences division.

Dr Spence moved to London in 2021 with his wife and four of his eight children.