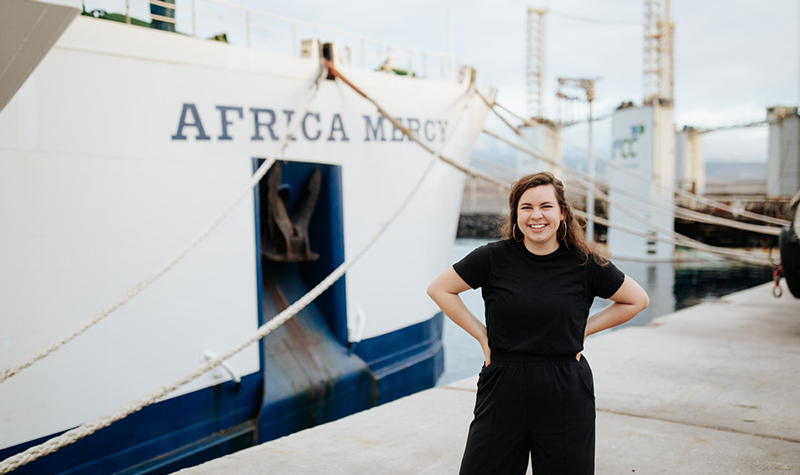 Posted at 12:34h in General by Tim Farquhar
0 Likes
Share

Since Mercy Ships was founded in 1978, the mission of transforming lives with Christian values at the core has inspired countless people, some not necessarily intrepid to begin with, to join us onboard and set sail to Africa. People from all different backgrounds and walks of life could see their part in the big picture, and this is still true today.

The incredible volunteers who sign up with us just can’t help coming back to serve, and in the case of Emily Frazier, even the pandemic couldn’t hold her back from being a Mercy Shipper. Despite curveballs such as new and changing territory, and sometimes unfamiliar tasks, crew and volunteers like Emily just keep saying yes. The mission has always remained the same, and Emily knew that the mission was worth it.

Faced with numerous changes along her journey, understanding the purpose of Mercy Ships kept Emily inspired to meet new challenges that tested her adaptability, courage, and ultimately upskilled her.

Emily was supposed to join the ship in June 2020. Then, the COVID-19 pandemic hit. Her start date was pushed to July, then September, then April 2021.

“They [Mercy Ships] called me and they were like, ‘Are you sure you want to go?’” she remembered, laughing. “And I was like, ‘Yeah, I just sold my car!’”

Many people find the experience serving so rewarding, they are willing to sell their cars or houses to join us in transforming lives and communities in Africa. But for Emily, another twist was in store. She was the only communications volunteer boarding the Africa Mercy. A photographer by trade, she discovered her first project would be a video.

Undeterred, Emily took the new opportunities in her stride and quickly grasped a range of new skills.

“I was like, ‘I’m so in over my head,’” she said. “It took me like an hour and a half just to find the video camera in the office.”

Now Emily does audio, video, reporting, vlogging and TikTok. “I’ve sort of become a quasi-journalist, or I guess just like, multimedia team in one,” Emily said.

And soon after Emily arrived onboard the Africa Mercy, docked in the Canary Islands, her plans changed again. She was invited to sail on the Global Mercy, a brand-new hospital ship, documenting the newest member of the Mercy Ships fleet as it made its way to Europe.

She said yes to the adventure. Emily quarantined at a hotel, then flew to Madrid, then Qatar, and finally Sri Lanka. When she boarded the Global Mercy, she didn’t have the luxury of a gangway. She took a late-night pilot boat and climbed a ladder up the side of the ship, anchored off the coast in choppy waters.

“After that, I was seasick for a couple of days, and then kind of got my legs,” she said. “Then it was just incredible, every day waking up and it’s like a 360 view of just open waters.”
The ship is now in Antwerp, in its “equipping” phase. A working hospital is being built inside the hull. “The hospital is completely empty right now,” Emily said. “It’s just empty halls, white floors, white walls.”

As the equipment is loaded in, the ship will fill with volunteers.

For Emily, this transitional season with Mercy Ships has brought with it something special.

“Some of the grittiest volunteers are among us, some of the most flexible volunteers, because we’ve had to deal with so many changes,” she said. “That’s probably been the best part, is just meeting people who really value the same things as me and who laugh in the face of challenges.”

They may have joined the ship at different points, but everyone shares one goal.

“Every day we’re getting closer and closer to getting to Africa,” Emily said. “Truly the vision has just been like, ‘We can’t wait to get this ship to do what it does best.’”
During her time at sea, Emily has found that she naturally connects with people from different departments: Engineers, deckhands, hospitality workers. She loves to bring people together. And there’s no better place than international waters.

On the ship, there are traditions, foods, and languages from many different nations. “That’s something that I want to participate in and continue to bring to the table,” Emily said. “Making sure that people don’t stay in their bodies of the same nation or the same job or the same gender or same generation.”

When Emily’s team of 20 first joined the eight-person skeleton crew of the Global Mercy off the coast of Sri Lanka, she saw something begin to happen. As the new volunteers joined the old, a community formed. They started celebrating birthdays. They gathered for movie nights.

“It was kind of crazy because it was like, you’re having a birthday party and you realise that everybody … would have never met in any other environment,” she said. “And I think that’s what Mercy Ships really is amazing at, is bringing people together.”

Are you a photographer, an engineer, or a hairstylist? No matter what skills you bring, there is a place for you in the Mercy Ships community. Whether you have two weeks or several years to give, if you’re ready to Make Your Mark, visit www.mercyships.org/makeyourmark to get started.