Looking for a life-changing career break? Professionally and personally, Mercy Ships could be the answer. 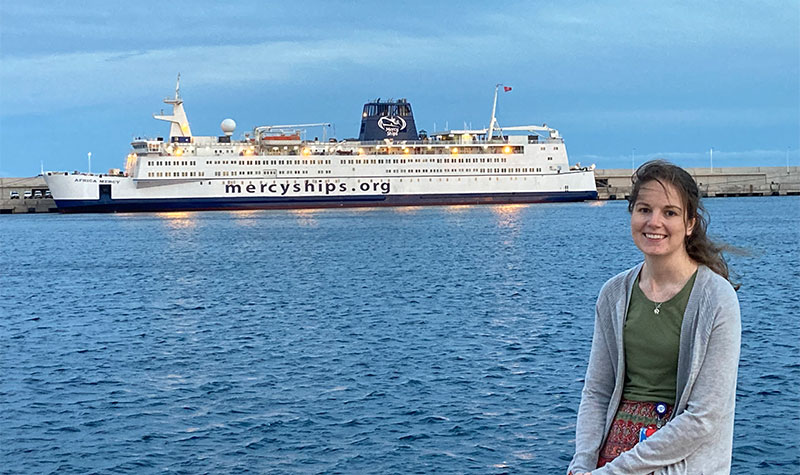 27 Jan Looking for a life-changing career break? Professionally and personally, Mercy Ships could be the answer.

If you had a career break, how would you use it? Travel? Perhaps spend time on a new interest to develop yourself professionally? Learn about different cultures? Nurse Jenny Powell discovered it could be all these and more when she volunteered for Mercy Ships.

Nurse Jenny Powell is currently on her second career break from Warwick Hospital and has used them both to volunteer as a nurse onboard a hospital ship for Mercy Ships.

And the 34-year-old believes she is the fortunate one.

“I’m so lucky that my work let me take career breaks so I can do this,” she said.

But Mercy Ships and the multitude of patients she has helped, feel they are the blessed ones. Jenny believes she is lucky to witness the charity delivering free inspirational surgical transformations onboard, while learning more than she ever thought possible.

Jenny, who grew up in Coventry, was only three when she decided she wanted to be a nurse and was given a little nurses’ outfit, complete with cape and bag, that she adored.

She read a Bachelor of Nursing at University of Liverpool before gaining experience in surgical nursing including surgical urology, trauma and orthopaedics at the Royal Liverpool Hospital and Warwick Hospital.

Jenny heard about Mercy Ships via a friend of her sister’s: “As soon as I looked Mercy Ships up, I knew that was what I wanted to do.”

It was January 2017 when she took her first five-month career break and headed to Benin in West Africa to serve on the hospital ship, the Africa Mercy.

“It was very, very different to what I had experienced before. I was on a generalised surgical ward that was only treating children at the time I went. I had only ever worked with adult patients before. Plus, you’re on a ship with so many different cultures.”

But these weren’t the only differences – what struck her was the overwhelming need and being part of something so transformational.

“These are people who have often been seeking treatment for so long. This would never happen at home. If you got a lump on your neck here, you would get seen. There it grows bigger and bigger and potentially takes your life. We are so lucky in our country – there is such a massive need elsewhere.”

Her second career break started in December 2018 when she went to Guinea. Here she says she was massively impacted by women’s health. An estimated 2 million women and girls in Africa currently endure the unspeakable suffering of a traumatic childbirth that leaves them in pain, outcast and incontinent.

The lack of access to maternity care means they struggle with prolonged, obstructed labour and are left with a debilitating condition called obstetric fistula (OBF). Tragically, sometimes their babies do not even survive the birth and the women are left, not only struggling with their devastating loss, but permanently leaking urine, and sometimes faeces.

Jenny met such women as they were given their long-awaited surgery with Mercy Ships, after years of isolation.

“It was so emotionally draining because all the stories of these women are so heart-breaking. They are shy and socially isolated.

“I remember there was this one lady who lived in the bush for 40 years and her community had disowned her. When she came in, you could see she was so affected by this. Just seeing her blossom into the woman she had been prevented from being all that time was incredible. She could never have had that opportunity.”

Jenny says she has noticed one thing many of the people Mercy Ships have in common – they’ve had to deal with rejection.

“So many patients have had a form of rejection before they reach Mercy Ships. You see people who were burned at an early age, shy children that won’t leave their mum. They have not seen people; they have not learnt to be children and play with other children.”

She acknowledges surgery and rehabilitation through Mercy Ships is just the first step in transforming their lives.

Another place she witnessed this was during paediatric cataracts surgery.

Jenny recalled, “We see them the next morning after surgery when their bandages come off and they see clearly for the first time. They have no memory of seeing, of what their parents look like. It’s amazing.

“I love it. It’s why you are there to see that transformation. It will affect them the rest of their lives. They can go and get a job, support their families, or go back to school. Opportunities they would never have had.”

“It felt like coming home. I feels right – this is where I need to be,” she affirmed.

“Everyone has chosen to be here so it has a different atmosphere because everyone is in the same place for the same purpose and they volunteered to be here.”

Right now, she is busy preparing the ship for its imminent return to Senegal – and she cannot wait to get there.

She added, “I’m so looking forward to it – it’s what we have all been waiting for, to finish what we started and get help to those patients who need it.”

Could this be the career break you have been looking for? We are so grateful for volunteers like Jenny, using their unique skills to transform lives. Make Your Mark – there’s a place for you onboard. Click here to find out more!