In the second instalment following what inspires her, Rachel tells us in her own words what makes volunteering so worthwhile for her. 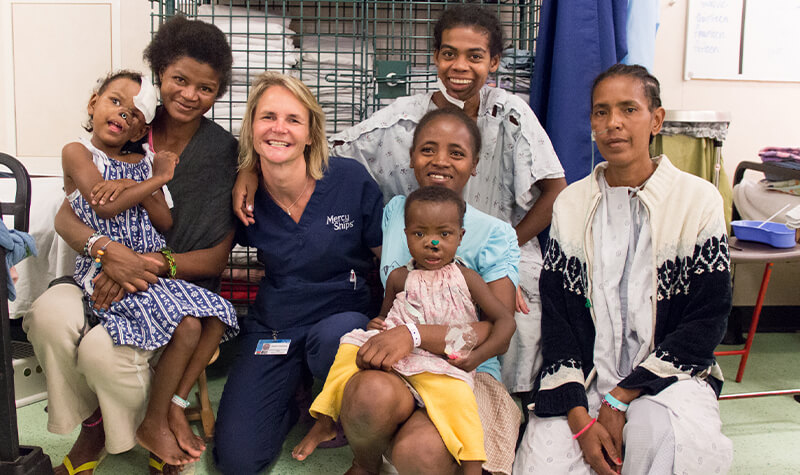 31 Mar In the second instalment following what inspires her, Rachel tells us in her own words what makes volunteering so worthwhile for her.

Posted at 11:36h in General by Tim Farquhar
3 Likes
Share

Nurse Rachel Greenland from Devon is preparing to volunteer for Mercy Ships for the 15th time. But what keeps her coming back? In the second instalment following what inspires her returns, Rachel tells us in her own words what makes volunteering so worthwhile for her (You can read part one here).

Ultimately, the unique experience of witnessing awe-inspiring transformations with people she truly relates to has made Rachel devoted to Mercy Ships. Here she highlights some of her most memorable patient encounters that have left a deep impact on her.

Rachel Greenland: “On a daily basis, it felt like there were so many special moments that make you feel so privileged to be involved in this work: moments like a child trying to pick up a shadow from the floor, after having her cataracts removed and being able to see a shadow for the first time! Watching the elation and disbelief on a mother’s face, when her child born with a cleft lip has their lip repaired.

“These are all unique moments that it is deeply humbling to witness and share.” 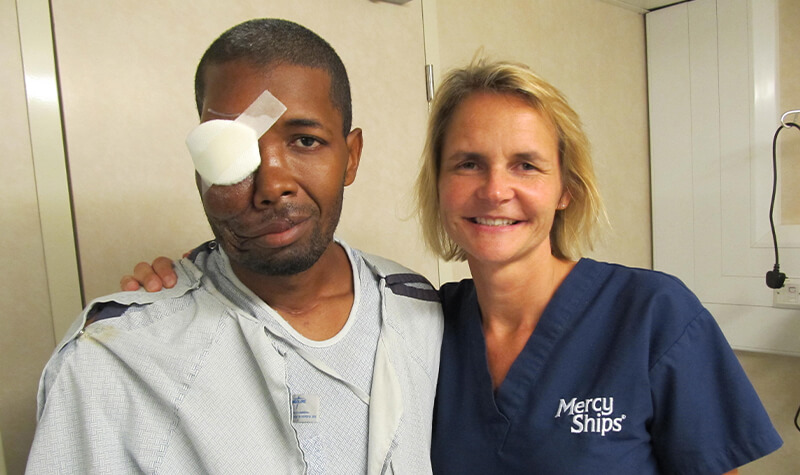 Rachel with Thierno after his surgery

Theirno was a previously fit young man in his 30s, who had been a footballer. When Theirno came to us he was not far from death. He had a facial tumour that was overtaking his airway and making it very difficult to eat. His body was bony and wasting away due to his inability to get food into his mouth. He was exhausted, anaemic and needed to increase his weight and nutrition to give him a good chance to survive the surgery.

Even though we didn’t speak the language, Thierno had a look of despair in his eyes that broke our hearts. There followed a few weeks which became a battle to keep Thierno alive and enable him to put on weight in a controlled manner so that he didn’t develop the complications of a refeeding syndrome.

After a tense few weeks and steady weight gain, the whole ship was praying for Thierno as the day came for surgery! Dr Gary Parker prayed over the overhead announcement system as he started surgery and asked for the crew to keep the surgery in our prayers today.

It was a long day and a time of tenderness and hope. Many hours later and overcoming some difficult moments in theatre, the surgery was complete. Thierno went to ICU overnight and made a steady recovery. He proved a courageous and brave patient, and he was loved by all on the wards. The day Theirno left the ward to return home, was a special day. We drove him to the port gates so he could get transport home. He was almost unrecognisable from the state that he came with. 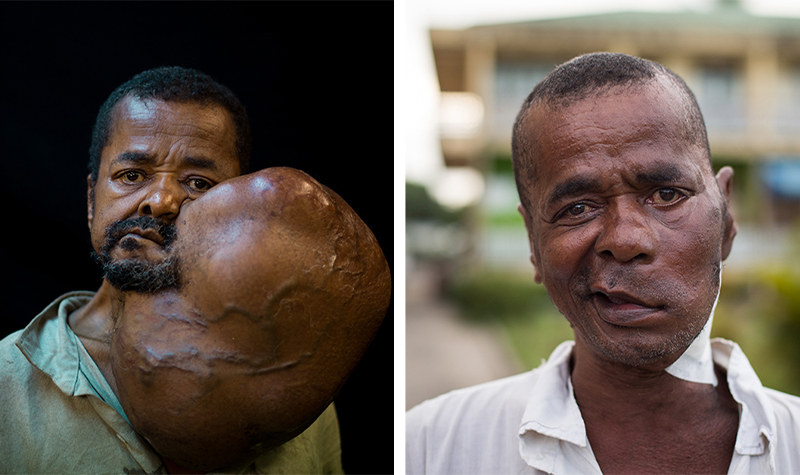 Sambany before and after his surgery

Sambany from Madagascar had a gigantic parotid tumour (facial tumour) for 19 years! I remember the day Sambany appeared at the ship. He turned up with his grandson who had helped him to walk for three days to reach the ship. He was brought onboard to be assessed by our expert surgeon Dr Gary Parker and the patient selection team. He was very weak, very anaemic and the whole weight of the tumour meant he had to lie down often, as it made it difficult to keep his head up.

It was soon decided that we had to attempt to remove this benign tumour, as Sambany would certainly die soon if we didn’t try. We needed to have a conversation with Sambany and his grandson about the surgery and the risks involved and ensure that if he consented it may mean that he wouldn’t survive. I had a long conversation with him and our Chaplaincy team who give the information in a culturally appropriate manner. Sambany expressed that he was like a dead man, so was ready to take the risk of the surgery. His grandson agreed.

The surgery started with a tangible tenderness as Dr Gary prayed for the surgery as he commenced the operation. Halfway through the surgery, there were some difficulties with bleeding. Donors came forward, including me. It is a huge privilege to be able to give blood to our patients, especially ones we now knew so well. The captain also prayed again through the overhead speakers for the surgical team and for Sambany’s life. Our prayers were answered and thanks to the exceptional skill of Dr Gary and the surgical team, Sambany pulled through. Not only was this a wonderful story of a patient whose life was saved, but it is also a beautiful story of many people pulling together with unity, driven by a heart of compassion. 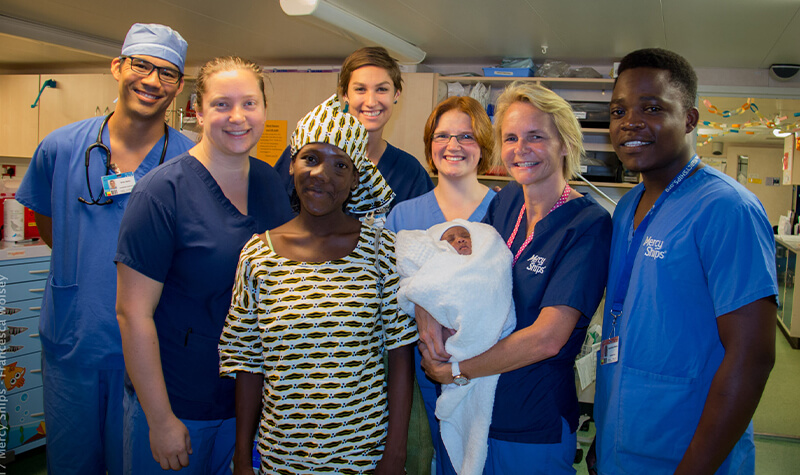 Amidou with the team who transformed her life

Another patient who will remain in my memories was Amidou in Benin. She had a large tumour protruding from her mouth. We were all excited to be seeing her without the disfigurement and to see her head raised from the shame and ridicule. Then came the disappointment, as Amidou was pregnant and it was too much risk for the baby to operate. Amidou was devastated. The whole team were so disappointed. As she left the ship, we wondered if she would make it back after the baby was born, knowing how fast some of the tumours grow. Several months later, with an elated admissions team, Amidou arrived onboard with her baby! She underwent the surgery while her family cared for her daughter. Everyone was very excited and the result of the surgery and Amidou’s new face was wonderful.

Rachel’s experiences with Mercy Ships have transformed her life. Could there be the perfect opportunity waiting for you too? Find out here. 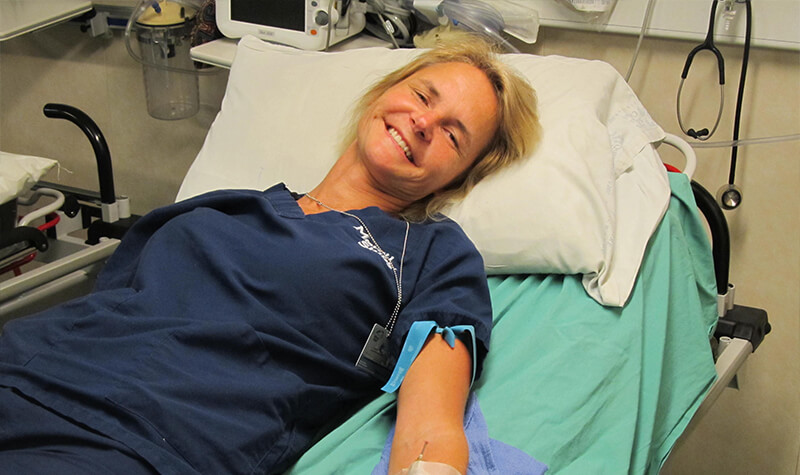