How volunteering in retirement can transform your life – and others 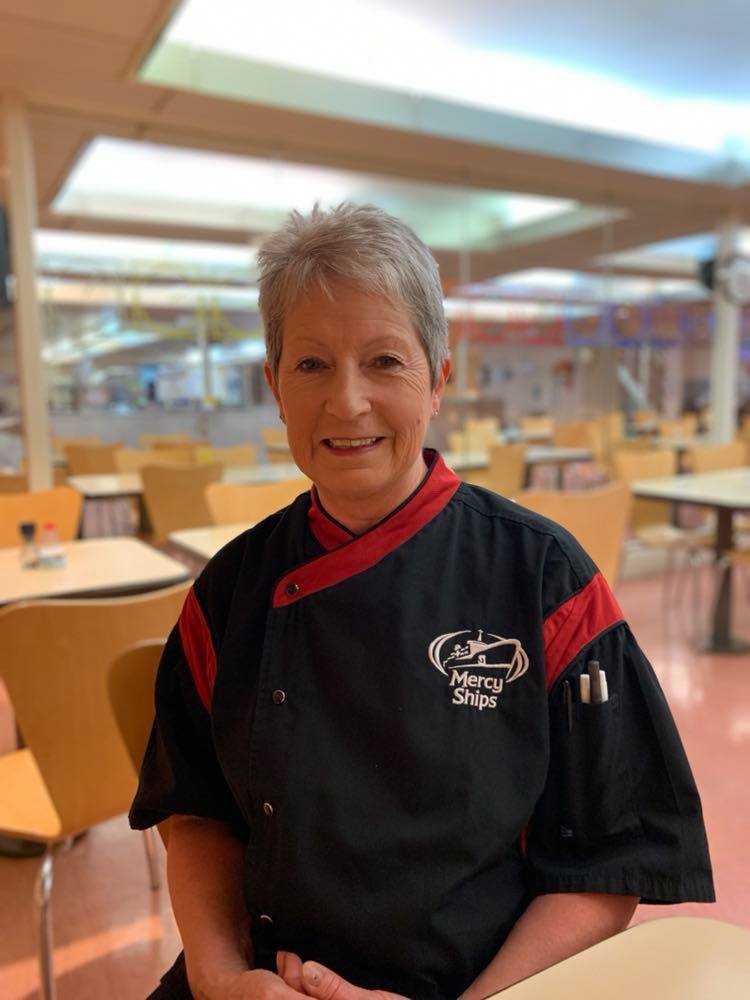 Posted at 14:12h in General by Tim Farquhar
5 Likes
Share

Grandmother of three, Moira Munro from Dundee, Scotland, has just returned from volunteering on the world’s first purpose-built hospital ship as it prepares to transform lives in West and Central Africa. But it’s not the first time the intrepid 69-year-old has upped sticks and given her time freely for international charity Mercy Ships, this was her sixth time serving. She explains what makes it so addictive.

Listening to the car radio on the way home from a late-night shift completely changed Moira Munro’s life.

It was 2004 and the 52-year-old nurse at The Royal Aberdeen Children’s Hospital had never heard of charity Mercy Ships before, but the radio programme impacted her. Her own children had grown and when she listened to real-life stories of how lives were being transformed through surgery and care in Africa, she was amazed.

“There were interviews from the ship and I was immediately interested. I had to apply,” she said.

Before she knew it, it was November 5th 2004 and she was arriving in Benin, between Ghana and Nigeria, at night to volunteer onboard the hospital ship the Anastasis.

“I thought, what on earth am I doing? When I looked out of the window, there were no streetlights. I knew no-one! I must admit, I was petrified.”

But before long, she had befriended a German girl sharing her cabin, met patients and was overwhelmed by what she witnessed onboard – experiences that would see her compelled to volunteer time and time again.

She said, “All the days I was a nurse, what people had to suffer in Africa was beyond my understanding. I had no idea it was so bad!”

Her nursing experience varied greatly from caring for sick babies on children’s wards to providing home care and even working on oil rigs but she had never witnessed such a genuine and critical need for surgical intervention in her life before Mercy Ships.

Moira recalled her first time on board, “I remember early on seeing these two teenage boys next to each other on the ward. They had come in with cleft lips and they were looking at the mirror in our hands and their reaction was like nothing I had seen before. It had changed their lives completely!

“They’d probably grown up thinking their cleft lip had been caused by witchcraft or something. But such a simple operation can change their lives utterly; something we at home take for granted.”

Today, the 69-year-old grandmother of three is an experienced veteran to Mercy Ships, and volunteering for the sixth time in 17 years. Her services have included Madagascar, Cameroon and Senegal and her roles, having retired as a nurse, have varied from dining room assistant to housekeeper to dental care assistant.

But no matter what role she has, the overwhelming impact she has seen while volunteering is something that keeps her coming back for more.

“People come in with huge tumours and cataracts – they literally come in blind and then they leave and they can see. It’s incredible to witness, to see their expressions and feel the transformation.

“People cover their faces with big scarves, people who have lived for years with disfigurements and isolated themselves. They come on board and everything changes. Their lives actually begin again. It never gets old.”

When she volunteered in a dentists’ clinic in Madagascar, Moira supported and held the hands of patients with advanced dental problems.

“I would hold their hands. When you see the state of their teeth when they open their mouth; you think of the pain they have suffered. It is truly awful to think of.

“They’re so desperate for care. There’s literally hundreds queueing and have never seen a dentist. There would be four or five dentists and they could manage about 60 a day and have to turn the rest away, which is so hard,” Moira recalled.

For some patients, it is too late by the time they seek help from Mercy Ships, which, for Moira, brought the stark reality of how vital the care is into even greater focus.

“One patient in Cameroon, when he opened his mouth and the dentist saw inside they had to tell him that they could not do anything for him, that he should go to a hospital.”

However, Moira says there is an overwhelming feeling of hope, especially at the aptly-named Hospital Out-Patient Extension Centre – or HOPE Centre, where patients recover from surgery on the dockside.

“When you visited the dock to the HOPE Centre of Africa Mercy, I loved how the kids would recognise you and run and hug you.”

Until last weekend, Moira was onboard Mercy Ship’s newest state-of-the-art hospital ship the Global Mercy, preparing it for serving in Senegal in spring 2022. The world’s first purpose-built hospital ship surpassed her expectations with her proclaiming: “It’s bigger and better than I ever imagined!”

But the outside did not impress her as much as the inside. As she saw it on the dockside, she said it had a Tardis-like quality and she had no idea what awaited her once she stepped on board.

She said, “It’s absolutely huge! It does not look huge from the outside but when you go inside it, it’s incredible! People at the end of the corridors look just like a dot in the distance! I went down to the hospital and it’s like being in a real hospital, it’s not like being in a ship at all. It’s so clean and everything smells new – it’s wonderful.”

Moira described her two-berth cabin as “luxury four-star” accommodation compared to her previous stints on ships. Her excitement of the new ship is contagious and one that she is determined to continue experiencing with her frequently returning and extending her stays.

For Moira, Mercy Ships is an experience she wishes she had known about before the age of 52 on the car radio. To anyone thinking of applying she said: “I would say to anyone considering applying, go for it! How will you know until you try? It’s an incredible experience. There really is a job for everyone on board.”

You can transform lives like Moria. To find out more about opportunities onboard visit https://www.mercyships.org/makeyourmark/