How Mercy Ships can change the lives of those who volunteer, not just those we serve 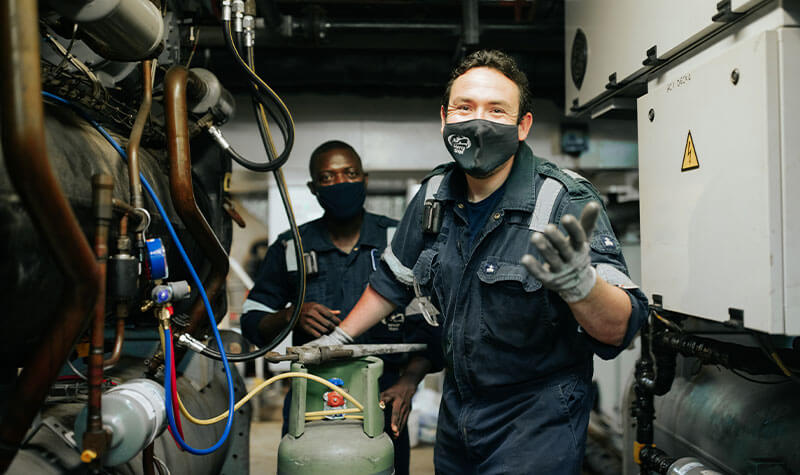 06 Jan How Mercy Ships can change the lives of those who volunteer, not just those we serve

Posted at 09:51h in General by Tim Farquhar
4 Likes
Share

Volunteering gave engineer Dan Lewis from Anglesey, North Wales so much more than he ever imagined, when he thought his role was just to give.

Remembering something his late mum once said would prove a saviour for Dan Lewis. It would turn his life around.

The 34-year-old had been caring for his mum before she sadly passed away at the end of 2020. He was devastated at the loss of the woman who had given him so much direction, love and motivation to follow his dreams to be an engineer.

“About six years ago I was watching the TV with mum and I remember it was about Mercy Ships. Mum turned to me and she said: ‘You should do something like this.’ I suddenly remembered her saying this and I made the decision to apply [in December 2020]. I wanted to go to give something back, so I volunteered.”

Within three months, he was onboard the Africa Mercy but he says when he looks back he had no idea how close to rock bottom he was. And how the volunteering experience was about to give him something entirely unexpected in return.

“Unbeknown to me, I wasn’t in a great state of mind. I was going through the motions, working hard but I had lost my way.

“I just came to volunteer, content that I had my bed, my food and hard work but the community side of things was not something I was expecting.”

He realised that he had lost much of his former self. Over the years, despite always thinking of himself as a Christian, he felt he had also lost his faith.

“Although it took me a while to let my guard down, I became a richer person with a very different and positive outlook on the world. I met incredible people who helped me back to how I used to be. They pulled me out of a dark place.

“I had not been the same person in recent times. They brought me back to my former self.”

He also rediscovered his faith.

“No-one pushed it on me but I found myself wanting to pray and read the Bible. I always thought of myself as a Christian but it gave me time to think about what my faith is. It happened naturally and I’m so happy it did.”

Dan served three months as an engineer officer specialising in heating and air conditioning (HVAC) onboard the Africa Mercy during its period of refitting, which will ensure the hospital ship can stay in service for the next 20 years.

It was a perfect opportunity for him to get sea-time towards regaining his certificate of competency after spending so many years working ashore.

“I was happy to do anything in engineering and that was a great opportunity to get my ticket again.”

From an early age, Dan showed an interest in anything engineering.

“I always took things apart. I was always on hand at home to help with anything DIY. Mum saw it was my passion from a young age and she encouraged me to follow this pathway.”

Dan was 17 when he first went to sea. He started by completing a cadetship in the Merchant Navy and held various posts as an engineering officer. In recent years he worked as a marine engineer in the nuclear decommissioning industry.

“I have always loved ships and being at sea. I would describe my Mercy Ships experience as fantastic. It was so much more organised than any ship I have ever been on! It was a great working atmosphere and one that I looked forward to.”

He added, “I met so many different and diverse people and nationalities. So many people took me under their wing and made a real effort to connect with me. It’s not what I came for. It wasn’t to help me. I came to give back.”

Volunteering for Mercy Ships was a life-changing experience for Dan. Could it be a transformational pathway for your talents too? Visit https://www.mercyships.org/makeyourmark/ to find out more!