How facing your fears could lead to your dream job 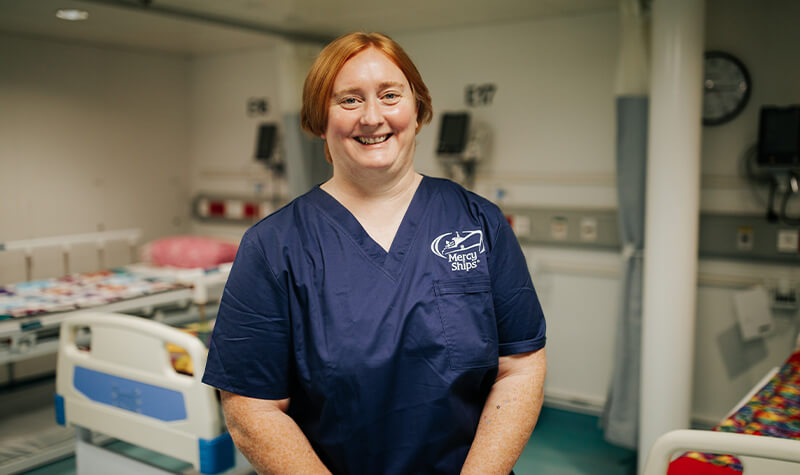 As a child, Jane White had a fierce dislike of both hospitals and water. And yet, her career saw her choose a path that combined both – and she isn’t even paid.

For the past decade, Jane, a nurse from County Down, Northern Ireland, has been volunteering for the international development charity Mercy Ships onboard the world’s largest civilian hospital ship, the Africa Mercy. Here she has worked tirelessly to provide life-enhancing and life-saving care to people across Central and West Africa.

She still can’t stand water, but she sees working for Mercy Ships as a privilege and honour and one that she loves.

“I don’t like water. I could drown in a shower! I don’t swim. It’s kind of weird that I don’t like the water, but I live on a boat,” Jane said.

Weirder still was her younger self’s aversion to anything medical.

She said, “I hated hospitals. I remember my grandparents being in and I hated it. I don’t think I even went to see them because I hated the smell.

“Never did I think I would spend almost 10 years serving with Mercy Ships but it is a privilege not just to look after people but their families too. Nursing was never one of those things I considered, but when I look back now, I realise doors closed for reasons and that reason was what lay ahead.”

She was tempted by agricultural studies and food science but says that after having a school placement in a veterinary hospital and working in a residential home, she felt a call to nursing and hasn’t looked back.

It was during her nurse training that she first heard of Mercy Ships and thought that one day she would like to do mission work. In 2008, at the age of 27, she left Belfast City Hospital and volunteered to do a seven-month stint with Mercy Ships. It felt so right she didn’t come home for four and half years. She returned home for three years before volunteering again in 2015 – until today.

With certainty, she said: “This is where God wants me to be and I believe this is where I am meant to be.”

She has worked in countries including Cameroon, Sierra Leone, Guinea, Togo, Senegal and Liberia where she has witnessed transforming and life-saving care daily. As ward manager on the Africa Mercy, she has been in charge of around 80 people including ward nurses, outpatients, wound care and dieticians.

But despite being responsible for so many people, the difference between Mercy Ships and any hospital she has ever worked in, is that all the doctors know all the nurses’ names and there is a sense of camaraderie for a common goal that she has never experienced before.

“You are all part of one circle. We are all here to do the same work for the same reason. I don’t want anyone to think that I am more elite and it’s the same with the doctors.

“I would love the model of here, and how everyone works onboard, to be how it is everywhere, in every job or walk of life. People come to Mercy Ships to serve and we are all in the same boat, literally.”

Witnessing the transformational care she plays a crucial part and it never fails to amaze Jane. She is always moved at the trust she sees in mother’s eyes when they hand over their children for surgery. Often they have travelled for days to reach the ship, desperately seeking surgery with no other options.

“I don’t have my own children but I have nieces and nephews and I know how I feel about them. Little words are often lost in translation and yet they still trust us and they help each other to as well. They all sit and talk and they tell each other to trust us and reassure each other. The way they look out for one another is unique.”

Jane has called the Africa Mercy ‘home’ – when in service, it’s a home she shares with around 400 volunteers from around the globe. But just recently she has been transferred and is set to call a new ship home.

She is now serving on the Global Mercy, the newest and most spectacular hospital ship in the Mercy Ships fleet being kitting out for service in Africa. On the purpose-built state-of-the-art hospital ship, she will take care of 102 general beds, plus another intensive care and low dependency totalling another 90 beds.

Her excitement for her new role is palpable: “I will be helping set up and then I will be doing the first field service in 2022. I wanted to be involved and I’m so excited to go and see it, to step on it. We have been talking about this ship for so long and I get to serve on it!

“If we can go in and do a little bit, even change the world for one person, then that makes a big difference. I love it.”

You can transform lives like Jane is. There are more than 200 volunteer opportunities available. Are you ready to start your next adventure? Visit https://www.mercyships.org/makeyourmark/