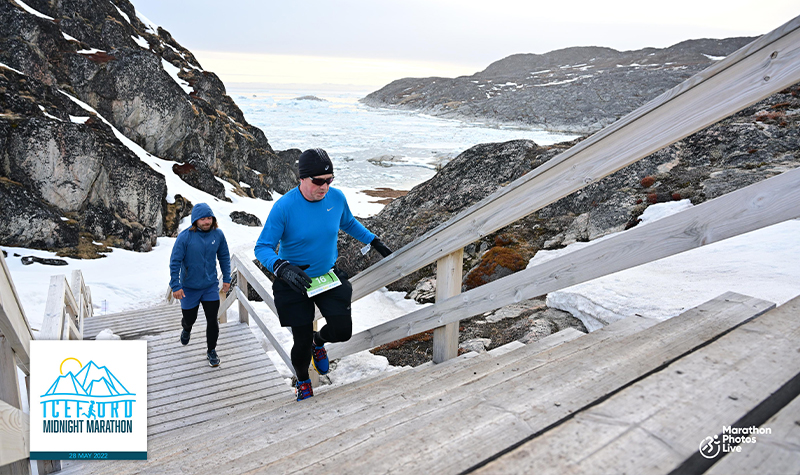 Posted at 13:41h in General by Tim Farquhar
3 Likes
Share

Running a marathon at night, in the Arctic while being offered whale chunks to eat may sound like a bad dream – but that’s just what headteacher Shaun Miles just did for Mercy Ships!

Dad of two, Shaun recently returned after completing the Greenland Icefjord Marathon. The challenge was the final event of a year of fundraising at his school, St Luke’s CofE Primary in Cannock, Staffordshire, which raised £2,300.

The pupils chose Mercy Ships to be their Charity of the Year after learning how it uses hospital ships to deliver free, world-class healthcare services, including surgery and training to strengthen and support countries in the developing world that need it most. Shaun admits his freezing 26.2-mile challenge through the remote, icy landscape of Northern Greenland was a massive challenge.

He said: “It was very cold and very strange. One of the interesting

things is that we were running through the night, and it did not get dark! The motivation to keep going was challenging because we did not have that cheering on you usually have as there was no-one there to watch because it was so cold and remote.

“It was treacherous in places and slippery, so we were careful and had to wear the right footwear with lots of traction.”

He completed the run in 5 hrs 25 mins at 2am while it was still broad daylight and around -6°C.

Rather than the usual offer of Jelly Babies at runners’ drink stations in the UK, in Northern Greenland the 40 runners were offered snacks of whale chunks, followed by raw fish sandwiches at the finish line.

Shaun said: “I turned down the whale, but I had a raw fish sandwich because I was starving when I finished at 2am!”

He said an inspiring speaker from Mercy Ships called Alison Briggs had delivered an assembly to the school children about Mercy Ships, and he had shared his story, pictures and videos with the pupils.

Shaun said: “The children have watched videos of Mercy Ships patients who have had surgery and been transformed, and they were really moved. I am always saying to them how fortunate they are and when they see these videos, they know they are and want to help others. The parents have been so generous. – I am very grateful.”

The children took part in a sponsored run at school, all running 2.62miles each, for the cause in the run up to their headteacher’s 26.2-mile challenge.

They also raised money through a crazy sock day where they all wore odd and bright socks and a ‘break the rules day’ where they could choose to ignore one rule, such as wear trainers instead of school shoes, for a day in exchange for a donation.

An art installation where all the children donated 2p coins and stuck them on a display board is now being totted up and the money will also be donated to Mercy Ships.

He said, “If we inspire children to realise they can make a difference and make the world a better place through their actions then we have done a great job.’”

Shaun’s run is also raising money for the Childhood Cancer Parents Alliance, which supports families of children with a cancer diagnosis.

To sponsor him visit Greenland Icefjord Marathon fundraising on JustGiving