Getting to the root of the problem: Ly Cheick’s Story 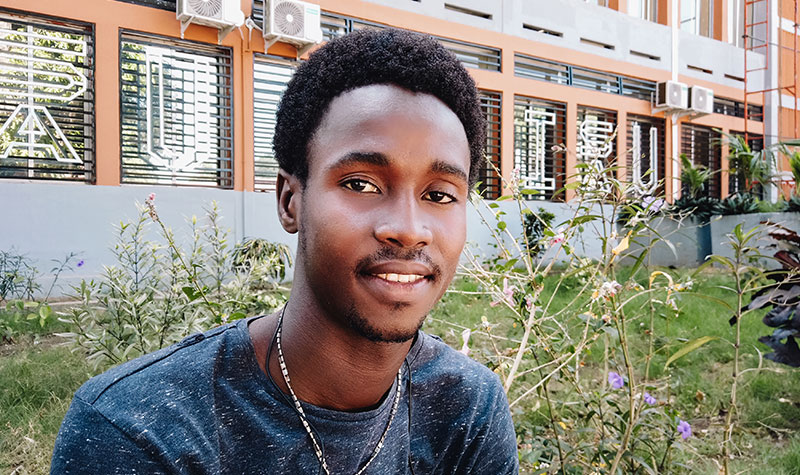 25 Mar Getting to the root of the problem: Ly Cheick’s Story

Posted at 11:53h in General by Tim Farquhar
45 Likes
Share

Ly Cheick, a 24-year-old Guinean student, had a bright future ahead of him. However, he had one health problem — one that was getting worse over time. He had noticed a bump growing in his mouth that was becoming more and more visible.

In 2020, after a recommendation from his doctor, he paid a visit to the dental clinic at Gamal Abdel Nasser University. This newly renovated clinic, led in partnership between Mercy Ships staff and the university’s administration, is an epicentre of training and hands-on learning in the port city of Conakry, Guinea.

Thanks to donated state-of-the-art medical technology, the clinic’s team were able to provide a panoramic radiograph which determined that the cause of Ly Cheick’s swelling was a maxillary tumour. The tumour was already larger than a golf ball at this stage and had already begun to cause immense discomfort. Left unchecked, it would have continued to grow significantly.

Once a clear diagnosis had been ascertained, Professor Raphiou Diallo — a long-time partner of Mercy Ships and a local maxillofacial surgeon — was able to perform life-changing surgery to remove Ly Cheick’s tumour.

Professor Diallo said, “He is fortunate that there is a panoramic X-ray machine that has been installed at the university which currently makes it possible, at a very low cost, to establish the radiological diagnosis in particular tumours.”

A straightforward journey to healing

Ly Cheick is one of the lucky ones. His case was caught and treated early, and he has a straightforward recovery ahead of him. He hasn’t been forced out of his education or had to stop working because of the tumour’s effect on his health. It could have been very different.

This happy ending hasn’t always been the case for patients with similar complaints. For many people in Guinea, simple dental procedures are hard to find. Many of the facial tumours our volunteer surgeons remove are caused by preventable dental problems.

As Professor Diallo explains, many patients in Guinea aren’t able to seek quality medical assistance due to limited resources in-country, a lack of financial means, or living too far away from care. As a result, many people turn to traditional practitioners who lack the ability to diagnose and treat them properly. In a tragic number of cases, this story ends with inoperable tumours and early deaths. This is exactly the outcome that the dental clinic’s team — including Professor Diallo and our Mercy Ships staff on the ground — are trying to prevent.

The life-changing impact of early treatment

Ly Cheick’s case is a powerful case in point. “It means a big thing to me,” he said of the surgery to remove his tumour. “It means a change in my life. In fact, I am living a new life without a tumour. It makes me happy deep down.”

“I am very proud of what is done by Mercy Ships,” said Professor Diallo. “I am sure that if the project continues, it will enable us to equip the cities of Guinea with excellent dentists, who will not only be able to prevent patients from complications at very advanced stages, but also to diagnose benign and malignant tumours at very early stages.”

Ly Cheick is just one example of the importance of lasting impact in action. While Mercy Ships medical crew typically perform more than a thousand surgical procedures onboard during each field service, the legacy lives on.

Thanks to surgeon mentoring and ongoing training programmes, like the dental school in Guinea, the hope for safe and affordable surgery can continue to change lives on the ground, long after Mercy Ships depart.