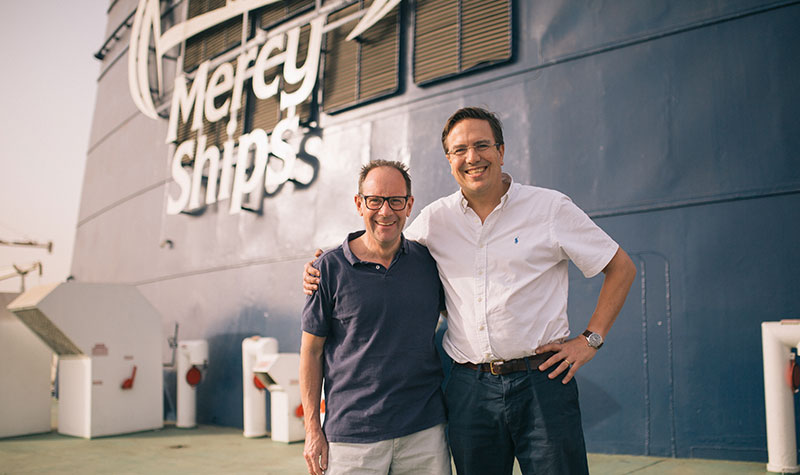 Posted at 11:32h in General by Tim Farquhar
0 Likes
Share

What are the chances of scrubbing up and walking into one of the operating theatres onboard the Africa Mercy and bumping into a close childhood friend, you’d lost touch with almost forty-six years ago? For general surgeon James Smellie and ophthalmic surgeon Richard Newsom (two of thirteen surgeons onboard the hospital ship this February) that is exactly what happened.

“To meet up with an old school buddy in Senegal is just one of these amazing coincidences,” says Richard. “When I saw James in the OR, it was a complete shock to me. I had no idea he was here.”

The two surgeons had gone to primary school together in Cambridge. Their parents worked as doctors and were colleagues in the same hospital, in Cambridge, and the families knew each other well. When they went off to separate boarding schools, the two lost touch.

“While I was preparing to come to the ship this year I saw Richard’s name, so knew I could meet him again,” said James, “but I hadn’t seen him since 1976, until he walked into the operating theatre.”

The two had a lot of catching up and reminiscing to do in a short space of time: James’ time onboard was coming to an end. “I’ve really enjoyed my time onboard Africa Mercy,” said James. “It’s been a good time including a nice reunion with an old friend as well as an eye-opener professionally. You’re never too senior to learn something!”

As the two talked about their lives and training, they realised that there had been some parallels and that they knew many of the same people. Yet, even though their professional development saw both study in south London and work in some of the same institutions, their paths never crossed. Until now onboard the world’s largest charity-run hospital ship in Senegal.

“I remember James as being one of the really bright guys at school, and have always wondered what had become of him,” said Richard. “It’s an amazing coincidence and I’d certainly like to stay in touch, and not wait another 46 years to meet up again!”

James Smellie left Dakar on 15 February 2020, and Richard Newsom departed from Senegal en-route back to the United Kingdom on 19 February 2020. They will both be back onboard Africa Mercy for the next field service that begins in Monrovia, Liberia later this year.