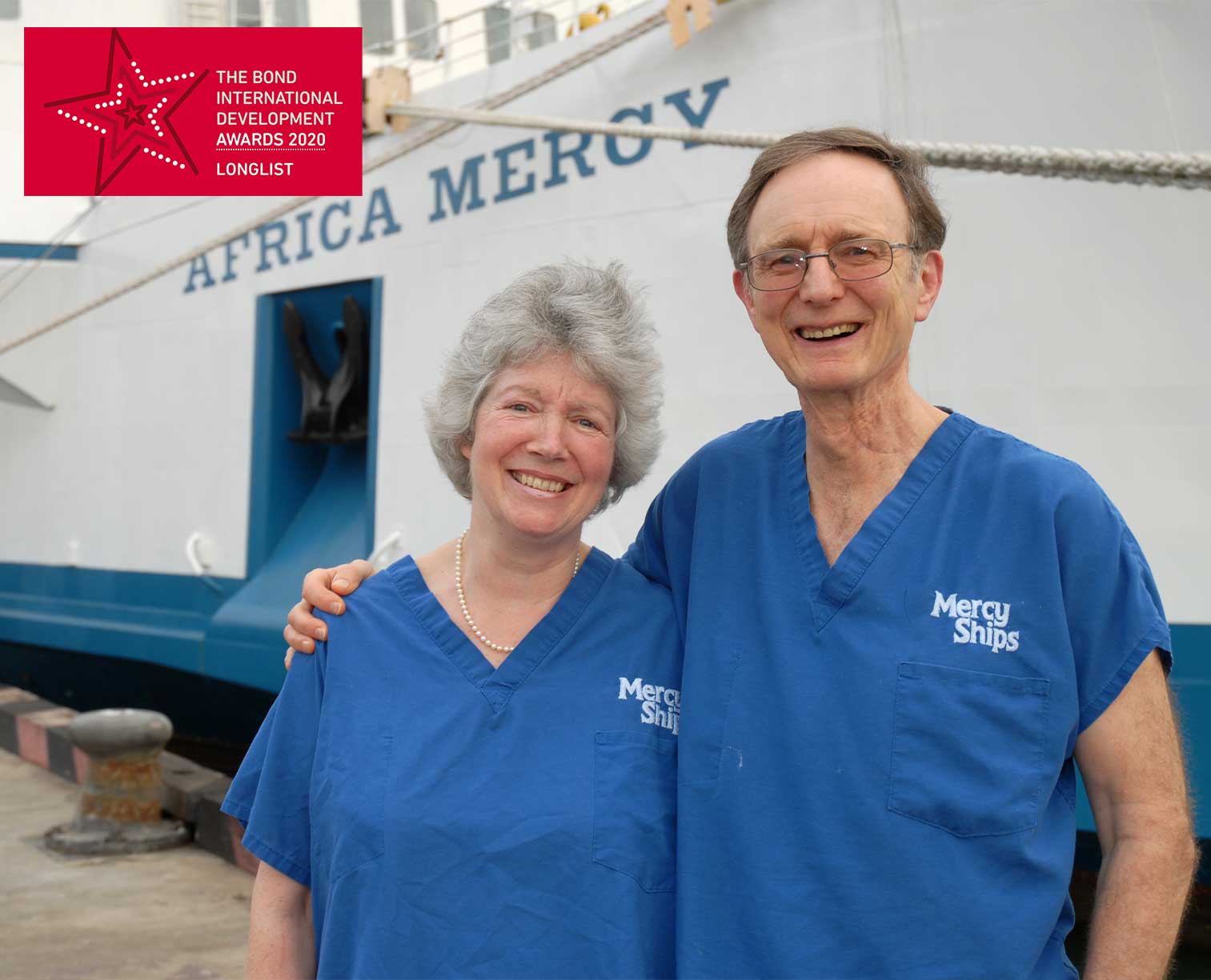 Posted at 09:57h in Fundraising by Tim Farquhar
0 Likes
Share

The Bond International Development Award recognises life-changing achievements made by individuals who are devoted to global development and humanitarian assistance. Our trustee and volunteer, Dr Keith Thomson, has been nominated, this is his story.

Dr Keith Thomson first read about Mercy Ships and the Anastasis (our first hospital ship) in 1990 in The Daily Telegraph and visited the ship just three days later while it was moored in London Docklands. During his tour of the ship, he learned all about the Mercy Ships mission to bring hope and healing to the world’s forgotten poor. The next year Dr Keith volunteered onboard the Anastasis, in Tema, Ghana as an anesthetist for three weeks.

“One hour after arrival I started working and continued for the next 11 hours: by then one really felt part of the friendly, highly motivated O.R. team!”

Dr Keith spent 20 years volunteering with Mercy Ships as a consultant anesthetist. Every year he served onboard for 2-3 weeks at a time and worked in 10 African nations.

“A short break away from the NHS to work in a country where specialised medical services are limited and potential waiting lists enormous can be a rewarding and worthwhile experience.”

He took in all that he could whilst volunteering with Mercy Ships, both on and off the ships.

“Off the ship, Ghana proved to be a fascinating country; the people were very friendly in spite of the widespread poverty.”

Dr Keith later became involved in Medical Capacity Building with Mercy Ships; organising delivery of the SAFE (Safer Anesthesia from Education) course, along with other UK anesthetists. The training consisted of three days of workshops, presentations and skills testing. Participants in the course showed signs of clear improvement.

Dr Keith received recognition by The Association of Anaesthetists of Great Britain and Ireland in 2009.

“My experiences with Mercy Ships have been the most rewarding of my life and I would encourage everyone who is considering volunteering to look at Mercy Ships… Often our patients are outcasts in their communities because of their physical deformities, but after surgery, they are once again accepted into their families… Their surgeries aren’t just operations – they give them back the hope and a chance to lead a normal life.”

Even in retirement, Dr Keith has a hand in the Mercy Ships operation, serving as an International and UK Board member. He has led by example from day one and continues to receive recognition with his ongoing affiliation with International Development in Healthcare.

Dr Keith has been nominated in the initial selection stage of the Bond International Development Award; the shortlist for the Volunteer Award will be announced in the next month.

Find out more about the Bond Volunteer Award 2020, here.