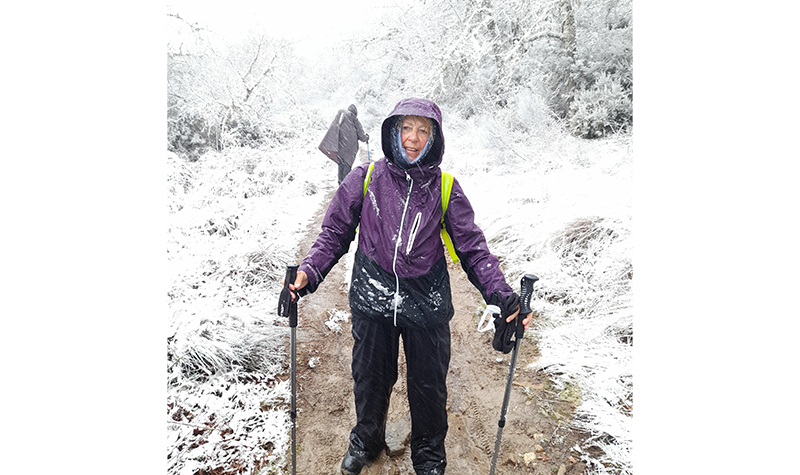 Posted at 15:01h in General by Tim Farquhar
2 Likes
Share

A grandmother from Cambridgeshire endured vertigo and freezing temperatures as she walked 500 miles to bring life-changing surgery to the world’s poorest nations.

Dawn Martin, 69, from Gamlingay has just finished walking the full length of the Camino de Santiago from St-Jean-Pied-de-Port from France to Spain for Mercy Ships.

It took her over six weeks to complete the ancient pilgrim route which finishes at the Santiago de Compostela cathedral in northern Spain, where the remains of St James the Apostle are said to be.

On her challenge, she experienced temperatures from -4oC to 28oC, climbed altitudes higher than Ben Nevis of 1,550m and struggled over treacherous paths as she had strained her hip just before leaving.

But despite hitting some real lows, she raised more than £2,000 and had many wonderful experiences.

Dawn said, “At one point I had a bout of vertigo as we walked up and mountain and the whole world seemed to be spinning, only to arrive to find the auberge [hotel] closed for a couple of hours and had to sit outside in the sleet and snow until they opened.”

As it was the first day the auberge had been open since October 2021, it was not heated, and she had to sleep in her hat, coat and gloves and they could only offer salad for dinner.

She said, “It was a very depressing day and night. The next morning, we woke to thick snow and the walk was quite treacherous that day as we were walking down the mountain.”

But thankfully, the weather improved days later and made the challenge much more enjoyable and she met some brilliant walking companions.

Dawn said, “My faith kept me going, especially in the most difficult times when I was alone. The people I met, we all supported one another and kept each other going with encouragement and support.

“However exhausted, unwell, and whatever pains I had, I just kept thinking how lucky I was that if I needed to see a doctor or buy painkillers from a pharmacy, I could do that. That really made me realise that the people Mercy Ships support don’t have the luxury of that medical back-up and how vital an organisation like Mercy Ships is to so many people in the world.”

Mum of three, Dawn, has spent most of her working life in medical and caring settings with the NHS encouraged others to take on the Camino challenge, as long as they are well prepared.

She said, “Make sure you prepare properly, lots of walking practise carrying a rucksack with weight and as much hill walking and climbing practice as you can. It is an experience like no other and one you will never ever forget.”

Dawn added, “I would just like to say thank you to all the wonderful people who work and volunteer for Mercy Ships, you are making such a difference to lots of people’s lives and to all the people who donated money and still donating because of the Camino.”

Thank you, Dawn, for your incredible challenge for Mercy Ships! You are transforming lives!

To sponsor Dawn on her 500-mile walk click here.