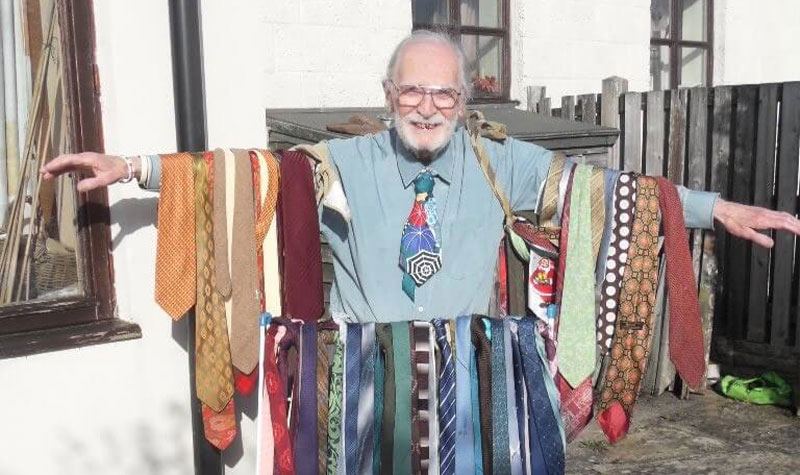 Posted at 09:51h in General by Tim Farquhar
18 Likes
Share

Inspired by the legendary Captain Sir Tom? Let us introduce you to the remarkable David Pepin!

At 84 years old – during lockdown in a global pandemic – most people might start thinking of themselves and their own misfortunes.

But not David Pepin from Alston, Cumbria.

Instead, the former primary school teacher came up with a very unique fundraising challenge to help others.

David had heard that Sir Captain Tom’s family were encouraging the nation to take on their own ‘100’ challenge to support their chosen charity. He opted to wear 100 ties, while playing or performing 100 hymns to friends and family online, with the help of his kind carer, Julie. And, if that wasn’t enough, he also decided to pen 100-word poems too – all to raise money and awareness for Mercy Ships.

TIES THAT BIND US

When David, who taught in both Hemel Hempstead and St Albans, heard of the 100 challenge, the first thing that sprung to mind was his burgeoning tie collection.

An Anglican who is also a Methodist church preacher, David has spent years collecting ties from charity shops. He said he accidentally once wrongly named the John Fawcett hymn: Blessed Be the Tie That Binds, with ‘Ties’ instead of ‘Tie’ and it became a running joke.

“I think my Simpsons tie is my favourite, but it’s hard to choose,” he pondered.

What made his challenge even more harmonious and poignant, was he combined it with his and his beloved late wife June, a concert pianist and composer’s love of hymns.

June and David shared a love of music, as do their sons, one of whom is counter tenor at Portsmouth Cathedral. When pioneering June Clark’s first works were published aged 20, she was one of very a small number of women composers in England. David wrote the lyrics to many of her songs, which are still popular today.

“Music is part of my life,” he affirmed. For him, he explained, the ‘ties’ were symbolic links to friends, places and his past, particularly during the isolation of the pandemic.

David said, “When you look at hymns, they are all linked to a place and those places bind and link the people we know. With COVID-19 it has been so important to keep ties with people while we have been at home.

“It’s important to remember everyone who has been alone and that we should keep those ties going. Many don’t have Zoom or technology. That’s why ties are so important to me.”

An author, David wrote many guide books for children with his late wife and his own book, Cathedrals of Britain, has been in print since 2016.

Here is one of his creations:

100 Hymns and Ties for Mercy Ships

since there’s great need for cash, and that’s clear – so

With my ties, and with people and places

on my mind, yes, and such friendly faces;

they seem close to me

as I bend down to tie my boot laces.

Some places once visited have given their name

to a fine hymn tune that’s brought them some fame;

to mind, ears and sight

as I’ve prayed and played – What a game!

For David, the greatest ‘tie’ that binds everyone is prayer.

He added, “Prayer joins us wherever we are, whenever we are. It helps us to remember and think about everyone through their ties with us. In these times, we should make sure we don’t forget people and make an effort to go through our address book.”

For David, that includes ‘ties’ with patients he has never met, and yet funded their life-changing treatment with his fundraising efforts.

Thank you, David, and everyone who has sponsored him!

Could you help him raise more on his online page here? https://uk.virginmoneygiving.com/DavidPepin

Do you think you could think up a fundraising challenge to support Mercy Ships work, like David?

Check out our fundraising page for helpful ideas and resources.