After a lifetime on the sea, one ship stands out for Richard O’Shea 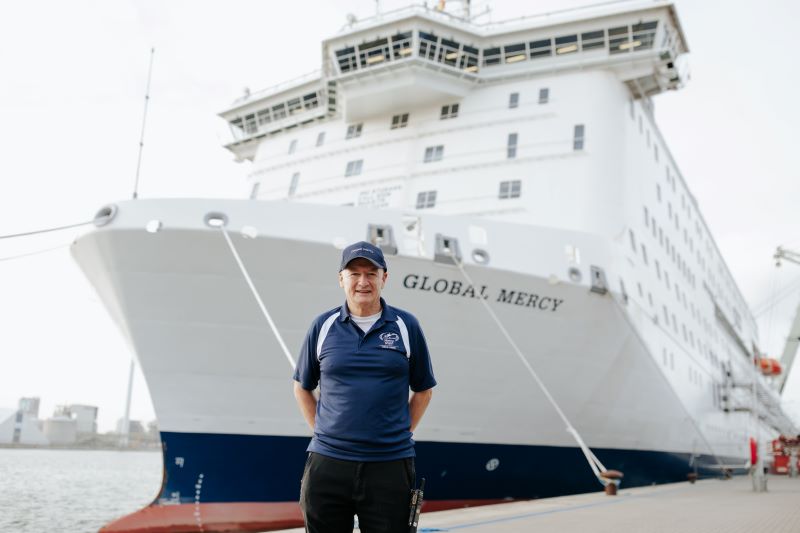 17 Mar After a lifetime on the sea, one ship stands out for Richard O’Shea

Richard O’Shea has spent his life as a seafarer, but no ship impacted him the way the Global Mercy did, when he first stepped onboard: “I have been onboard thousands of ships, but it was amazing – a purpose-built hospital ship and on such a scale! It’s breath-taking!”

Aged 17, Richard O’Shea from Skerries near Dublin was struggling to come up with a career choice when he realised, he could kill two birds with one stone.

“I loved to travel so I thought I would join the Merchant Navy as I would get to travel and get paid at the same time,” the now 64-year-old said.

It was to prove a brilliant decision that would see him have a rich and varied life.

He progressed quickly from cadet with the Irish Shipping Ltd going on to become a captain of a small ship navigating the Manchester Ship Canal aged just 28.

There were many occasions when people would look at his young face and ask to speak to the captain, not realising he was standing in front of them.

“That was always funny because I looked too young.”

Being a family man now he did not like to be far from home where his two boys were growing up, so he was very happy when he got a further captain job with another much-desired route up the Manchester Ship Canal. This time he was captaining tankers for beer-makers Guinness, transporting 1.7 million pints of the dark stout from Dublin to Runcorn three times a week.

“I thought I would never get on them as everyone wanted that job. We never had more than two days away from Dublin. For a seafarer wanting to see your young family regularly, this was brilliant.”

But despite lovingly transporting Guinness for five years, he doesn’t actually like drinking it, preferring wine instead.

Later jobs would vary from tending lighthouses off the west coast of Ireland to working on Stena Line as second officer and relief captain on routes to five different ports in Europe and then the closer to home as a shore-based harbour pilot in Belfast, where he went on thousands of ships.

But he says, he always had a feeling he wanted to do something more.

He said, “The sea was good to me with a varied and interesting career, but I always wanted to give something back.”

He’d heard of Mercy Ships for many years, having seen the Africa Mercy in South Africa, and decided to retire two years early and volunteer onboard a hospital ship.

“It was something that I always felt the Lord was tapping on my shoulder and asking me to do.”

Having visited some 70 countries, including Kenya, Nigeria, South Africa and Mozambique he said he has witnessed how much need there is for better healthcare in Africa.

“You take so many things for granted, and you get to these countries and you see how privileged and blessed we are. We may have had COVID-19 and there may be delays but we still know we will get treated at some point – but they never have that guarantee.”

So, he retired with a plan to volunteer for Mercy Ships. His wife Bernadette, a public health nurse, was also due to volunteer with him. The pair were galvanised for the long-awaited opportunity.

Their plans had to be halted but Richard was determined to get onboard, and an opportunity came in November 2021. Unfortunately, Bernadette was tied up with work but he set off to serve on the Global Mercy as the second officer for six weeks.

He was surprised at how special this one ship was after serving on so many: “I have been onboard thousands of ships, but it was amazing – a purpose-built hospital ship and on such a scale! It’s breath-taking! It was a privilege to be on there for the first service ever held onboard. The emotions felt reflected the incredible journey and all the struggles that have been faced to see it all come together.

“Sometimes the Lord’s plan is bigger and better than we can ever foresee.”

It was challenging for him to get to grips with the role but one he relished.

Richard said, “Working on the Global Mercy was a steep learning curve as I had to get to know the Mercy Ships way of doing things, while physically doing the job, which was not easy. After one month of doing the job, I was a lot more comfortable with things.

“Mercy Ships has really moved to the big league with the Global Mercy. It needs a lot of tender loving care so we spent a lot of time testing systems. Because it’s all new and everyone is learning from scratch on a new ship, it was a fun learning curve for everyone, all together.”

For Richard, one unique thing that struck him was that everyone, no matter what their role, worked together as one.

“People with senior-level managerial jobs switch to volunteer as a cleaner onboard. I was so impressed with the people and just how humble they all were.”

Although he admits he found it a little hard to remember he was not the captain anymore and had to remember to bite his tongue at time, he threw himself into the role and he’s so grateful he did.

“I’m so glad I got to go, that I got the opportunity. I loved the fellowship onboard, the worship times in the morning. I enjoyed meeting people and hearing true stories. To have such a varied group of experiences was astounding but they all shared this vision to bring healthcare to Africa.

“At my age, I could have just joined the bowls club but I decided to do this and my sons were very supportive and happy for me. I wanted to keep fit and mentally stimulated and it did that. I want to go again and I would love Bernadette to experience it too.”

The couple are set to serve on the Africa Mercy in May.

There’s a place for your unique talents onboard too. Why not see what positions would suit you? Click here.