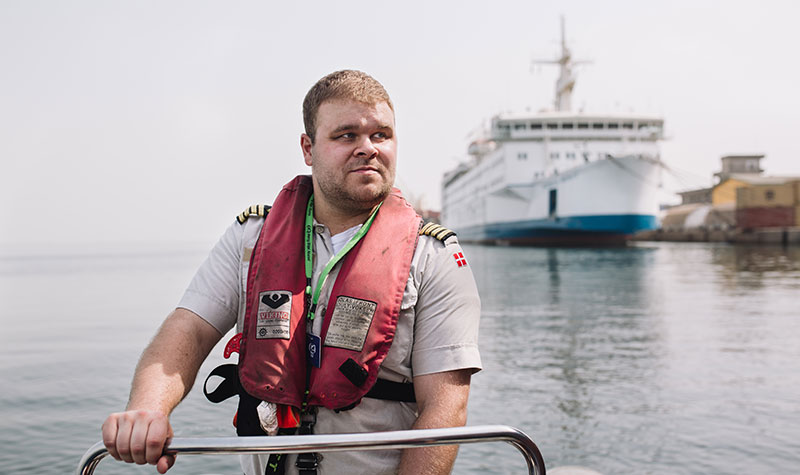 Did you ever have a childhood dream that seemed impossible? 11-year-old Milo’s dream certainly did.

Milan “Milo” Falsing claimed a few firsts when he became captain of the Africa Mercy, the world’s largest charity hospital ship. He was the first Scandinavian volunteer to captain the ship and the youngest captain in Mercy Ships history. But Milo’s connection to the Africa Mercy goes much deeper still.

We all have a special journey; a well-known route that is important to us and reminds us of what is important. It could be your journey to an annual family holiday, the small country lanes becoming familiar and welcoming as you get close to your destination, or the road to your parents’ house or a regular walk near where you live. For Milo, that journey was to see his grandparents.

Born and raised in the small town of Hoeng in Denmark, Milo had to catch a ferry, the Dronning Ingrid, to visit his grandparents. “It was always a special occasion for me and my sister,” he recalls. “On the starboard side forward, there was a play area for children.”

Then in May 1997, the Danish ferry the Dronning Ingrid stopped running. A tunnel from the cities of Koersoer to Sproege had been built and made the ferries which plied the waters above obsolete. For Milo, who was 11-years-old at this point, it was heartbreaking; he cried for several days after the announcement was made. 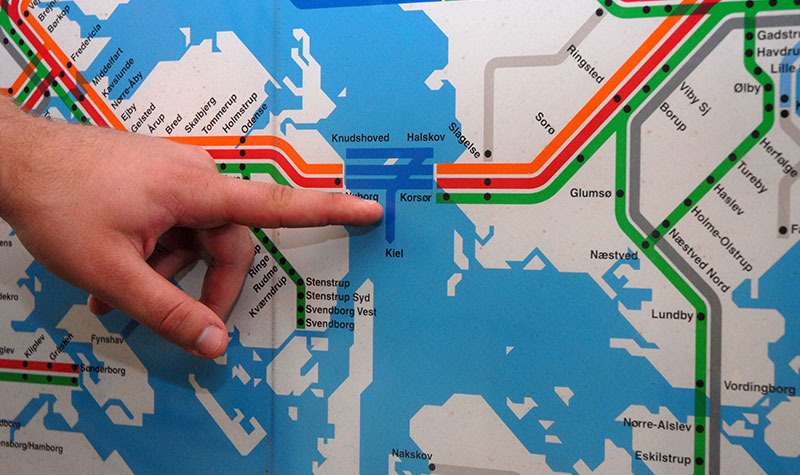 The Dronning Ingrid’s route. The ship also used to ferry trains as well as people.

Milo had many happy memories onboard the ferry and he was devastated to think there would be no more. His concerned mother contacted the ferry’s owner and asked if Milo and his siblings could visit the ferry one last time to say farewell. To Milo’s joy, the request was granted.

“When my mother gave me the good news, I was all jumpy and so happy,” he said.

When the day arrived, Milo and his family were given a tour of the ferry, and he and his siblings were able to enjoy one last time in the play area.

As he stood on the bridge of the Dronning Ingrid, aged 11, watching the retiring captain of the ferry at work, Milo made the decision to become a sailor. Since that day he has always dreamed of returning and captaining the ship which has shaped the course of his life and now his dream has become reality.

He began to prepare for his life at sea by choosing to go to a boarding school with a maritime focus. From there he went to a maritime school, where he could get a seaman’s degree that would allow him to find a position on a ship.

As he continued his education, Milo kept his interest in the Dronning Ingrid alive. When Mercy Ships bought the ferry in 1999, it was moved to Newcastle in the United Kingdom, to be renovated to become the hospital ship, the Africa Mercy.

“I had never heard of Mercy Ships before and wondered what they were,” he said. Milo’s interest was piqued as he followed the progress of the renovation. After seven years of renovations in 2006, he saw the once ferry again – now a state-of-the-art hospital ship. Now Milo knew he had a chance to serve onboard, a chance to realise his childhood dream. 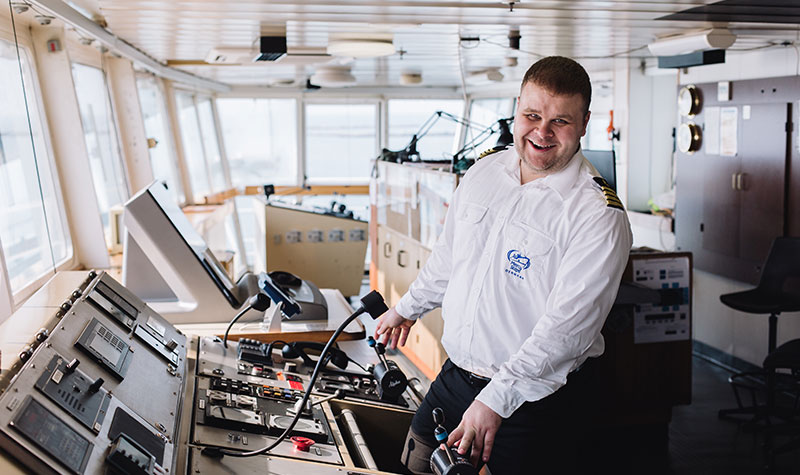 Milo delighted to be back on the ship where it all started.

“Finally seeing my dream of being captain onboard this ship come true was breathtaking,” Milo said. “It’s been an incredible journey — to go from having an ambition to eventually being here and being a part of it.”

“The ferry I knew as a child and the ship I know now, they have a similar feeling. The ferry was bringing people from one place to another – it was a small journey, but it meant something,” he said. “There are still journeys happening on the Africa Mercy. This ship is now bringing people from somewhere they don’t want to be, to somewhere they’ve dreamed of. It meant something then, and it means something now. That rush of going up the gangway, the feeling of stepping onto a big ship; I get the same feeling now as I did when I was a little boy!”

And now, his dream realised, Milo does what he can to give patients onboard the Africa Mercy the chance to feel as he once did. Patients are able to come up to the bridge and see how the ship is operated and get a view from the Captain’s chair. They stand where 11-year-old Milo once stood as his future began to take shape. 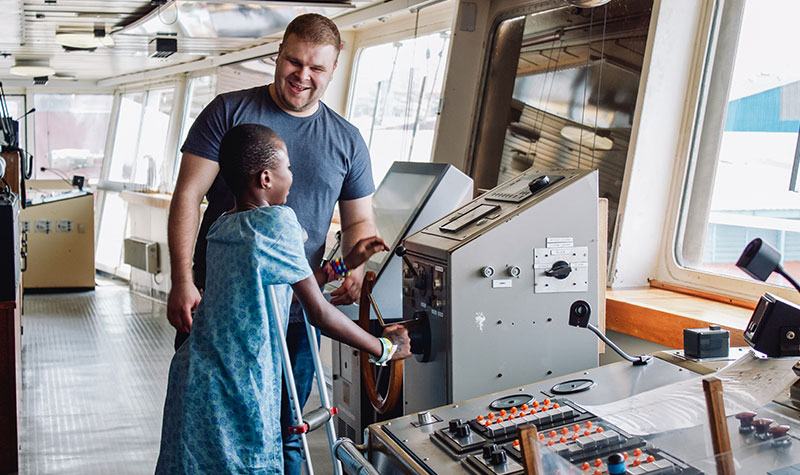 Milo shows a patient around the bridge of the Africa Mercy.

Without Milo, and other volunteer captains, Mercy Ships would not be able to operate; our hospital ship needs a captain and it also needs a crew. We need over 400 volunteers to crew the ship and only half of those roles are medical. We need engineers, deck officers, cleaners, receptionists, plumbers, carpenters and so many more skills. No matter what your skills, we need you. To find out more click here. 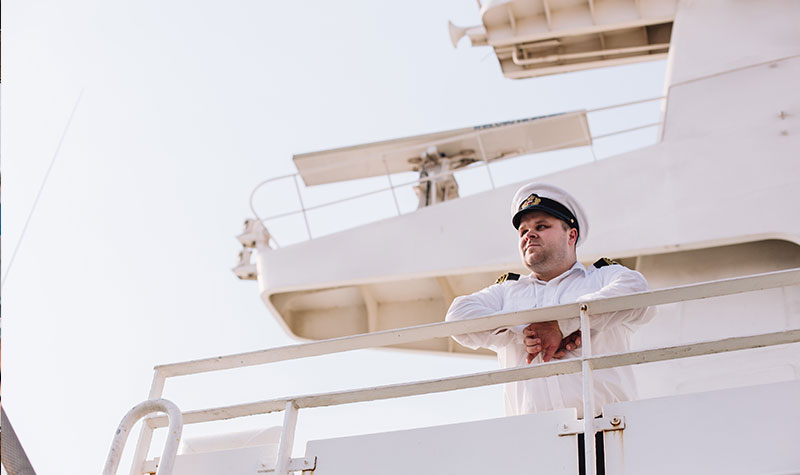 Captain Milo Falsing standing on Deck 8 with the mast behind him – a similar picture to one taken as a child on the Dronning Ingrid. 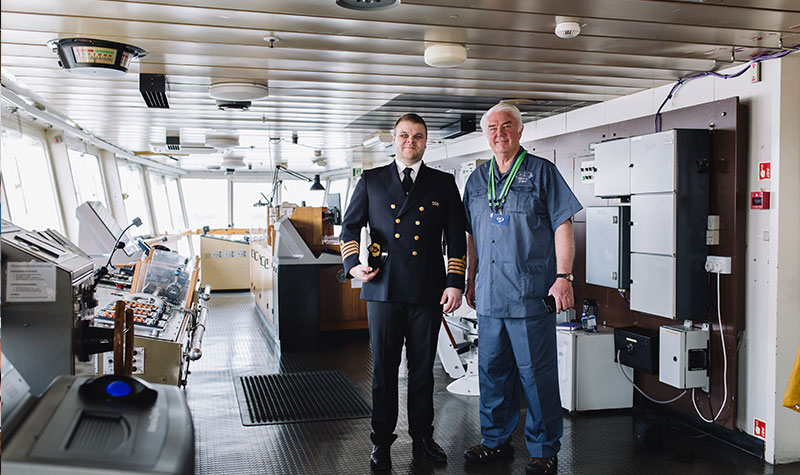