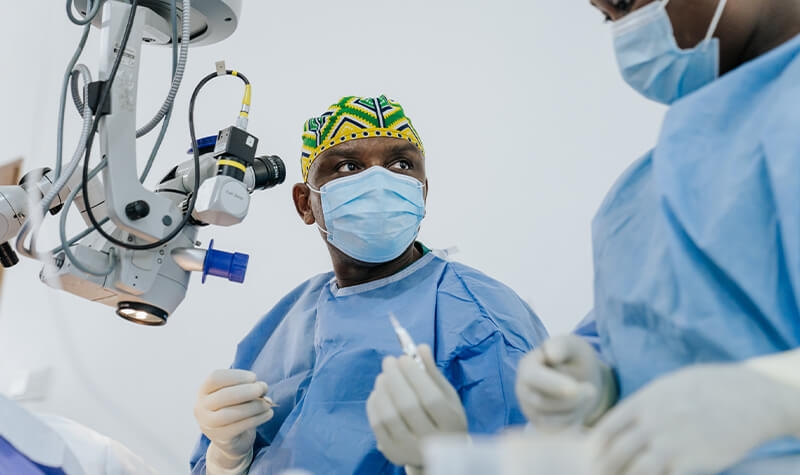 Posted at 10:18h in General by Tim Farquhar
0 Likes
Share

In July, Mercy Ships video producer Caleb and myself (brand editor) boarded a plane to Lomé, Togo with a few suitcases of camera equipment. We were headed to meet Dr Abram Wodomé, a former trainee and current partner of Mercy Ships. After completing his ophthalmic surgical training on a Mercy Ships hospital ship, the Africa Mercy a decade ago, Dr Wodomé discovered a passion for non-profit work. He opened his own clinic, where he continues to perform free cataract surgeries and train other local surgeons. We were going to Togo to share his story.

Thirty-odd hours later, we arrived late on a Saturday evening. To our surprise, when we walked out the doors of the airport into the muggy heat, Dr Wodomé was there to greet us. We’d never met, nor had we asked him to pick us up, but the Mercy Ships connection is all it takes. We were immediately treated like family.

The next day began with a detailed tour of Dr Wodomé’s clinic: Clinique Ophtalmologique Lumière Divine. The clinic includes comfortable waiting rooms, a two-bed operating theatre, and several pre-and post-operation examination rooms. A recent addition to the clinic is housing where ophthalmic trainees can stay during their three-month mentoring period.

Dr Wodomé is extremely passionate about his work. His entire face lights up when he talks about the way surgery changes a person’s life.

As the country’s leading cataract surgeon, he provides thousands of surgeries every year to visually impaired patients. Many of these surgeries are performed completely free of charge. Any funds raised by patients who choose to pay immediately go toward paying for more people to receive free surgery.

Not content with waiting for people in need to find him and his team, Dr Wodomé goes far out of his way to make free surgeries happen. His team runs door-to-door campaigns in remote regions of the country and even organise transport to the clinic so that patients in remote areas can receive treatment in Lomé.

During our first week at the clinic, we accompanied Dr Wodomé’s team to a northern village for a screening day. The team expertly assessed a group of about 20 patients in one of the village centres. Dr Harry, who was recently trained by Dr Wodomé and now works at the clinic, evaluated each person’s vision to determine whether they were a viable candidate for surgery. Within an hour, the screening was all done and we were en route to the next site: an empty school building. Rows of desks were pushed to the side to make way for patients, typically elderly men and women led in by their younger relatives.

Here we met 70-year-old Hounsigbo. She’s been unable to see properly for ten years and completely blinded by cataracts for the last three years, so her grandson, Louis, had become her guide. Her biggest wish was to see her loved ones again. If her eyesight could be restored, she said the first thing she would do is gather her seven grandkids around her and simply look at their faces.

It was good news for Hounsigbo, who was quickly scheduled for a follow-up surgical appointment. She and Louis were all smiles as the screening team pulled away.

Back at the clinic, all hands were on deck to prepare for a fresh week of surgeries. At the beginning of 2021, Dr Wodomé partnered with Mercy Ships in a new way. He launched a cataract surgical training programme that allows local surgeons to shadow him for three months and learn the manual small-incision cataract surgery (MSICS) method, a cataract surgical technique that’s ideally suited for low resource settings. His students also learn how to train others in turn, creating an exponential future impact.

During our two-week visit, the trainee in question was a young surgeon named Dr Dalia. On a typical day, Dr Wodomé performs a cataract surgery in under 7 minutes (we pulled out the stopwatch and timed him). He has performed more than 15,000 such surgeries during his career. However, during training days, the clock slows down. One surgery might take 40 minutes, as he meticulously guides his student’s every move.

After a long week of surgeries, one moment stands out. The day after Hounsigbo’s surgery, she returned to the clinic for her post-operation appointment. A nurse removed the bandage across her face, and she blinked her eyes open for the first time. A smile like a beam of light burst across her face. The operation was a success. For the first time in a decade, she can see. Hounsigbo ran into the exam room where Dr Wodomé was working and wraps him in a celebration hug. His smile echoed hers. Another person’s sight restored; another family changed.

When the week is over, it’s time to celebrate. To the sound of drums and singing, Dr Wodome’s team and patients dance together, celebrating the fact that those who were once blind can now see.

The Future of Togo

Before leaving Togo, we asked Dr Wodomé one last question. What does the future of healthcare in Africa look like?

“The future of surgery for me in Africa looks very bright because more and more people are interested in quality training. It is the basis of everything. When the training is of good quality, the surgery gives good results, and the patients are also confident about their practitioners. I think that over the next few years, Africa is promised a better future.”